If you’ve held it together this far, the Renjo La won’t seem like much of a big deal. Up and over a pass and a swim into the thicker air of lower altitude. Be sure to look around at the scenery though as it is varied and the trail sweeps through a valley of pastures and ranches that you may have missed if trekking in from Lukla.

If you have fast feet and an early start, a trek all the way to Namche is possible but a stop in Thame is more reasonable. Thame is a thriving mountain town that unlike the other stops on the Three Passes exists on more than tourism. The town is the home of many famous Sherpas, past and present, including Tensing Norgay. 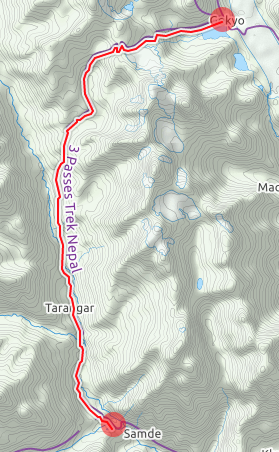 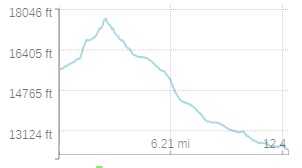 Up to the Renjo La

There’s something different about going out. The Renjo La was the last pass and then there would be nothing between us and Kathmandu but an airplane. I was melancholy as we plodded up the pass and took our pics together with three fingers in the air. That was it, it was done, time to go home. 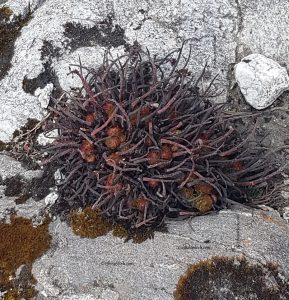 A strange organism we saw on the pass.

That morning we had said goodbye to our group and except for a couple American kids who showed up out of nowhere, we were the only ones on the pass. The weather again caught us on the pass, if I had it to do over again, I’d set out for every pass at 3am, just to increase the odds of being able to see the mountains I came to see. Cho Oyu was a priority for me, never got to see it in Gokyo.

Bryon and me on the 3rd of the Three Passes

Skipping down the pass

The monsoon spilling up the valley.

Expecting a wet trip down from the pass, we donned our rain gear, but didn’t end up needing it. The late May monsoon was blowing into the mountains, but short of a few sprinkles spared the valleys the onslaught.

There was more snow than the Cho La, but neither of us found it challenging, despite the fact there was little in the way of steps kicked through.

Vegetation appeared, real vegetation, which we had not seen since Namche, and then ranches appeared. The ranches seemed to focus on yaks and whatever goes along with yaks, but they seemed to be doing more business than their counterparts around Pangboche.

Another strange organism. Probably a Yak-cow hybrid female named Dzomo. Interesting fact: Most of the pack animals to EBC are Dzo’s, the male variety.

I developed another headache, and concluded it was due to not drinking enough water, which might have been my problem on all the passes. Whereas Bryon used a hydration system, I only used Nalgene bottles which were a pain to grab from my backpack. The next time I hike above 15k, I’ll pay more attention to hydration.

The headache was gone after a quick lunch stop in Ludgen, though. Fanta, black coffee, and potatoes did the trick.

As we approached Thame, the valley tightened and the clouds streaming in picked up their pace. They must have been traveling at 40mph up the valley, and it seemed as if we could reach up and drag our fingers through it. It must have been less than 500 feet above our heads.

Thame was a real community and not just a collection of lodges to satisfy tourists. It was even hard for me to qualify Namche as a real community. I felt I hadn’t been in one since prior to joining the Lukla Zombie Train. There were signs pointing the way to lodges though and we made our way to the Valley View Guesthouse where we encountered a crotchety old western lady. Calm down, we just asked if the rooms are any good, we didn’t mean to disturb you.

The dining hall was lined with pics of famous mountaineers, including Edmund Hillary. We got to talking with older Nepali at the lodge who was an engineer helping to build schools in the Khumbu. He explained that a doctor who climbed Everest 21 times owned the lodge and was part of the initiative to get the schools built. I enjoyed his conversation until he spoke of how the Internet didn’t grow food. And a farm doesn’t educate children.