With Acclimation no longer an issue, it would certainly be possible to breeze on through Gokyo and do the 3rd and final pass the next day, but Gokyo is too beautiful to pass up, an attraction on its own. Even two days would be recommended.

Gokyo Ri, an easily accessible summit standing straight above Gokyo Lake is an attraction for one day, as the Gokyo Lakes trek is for the next. 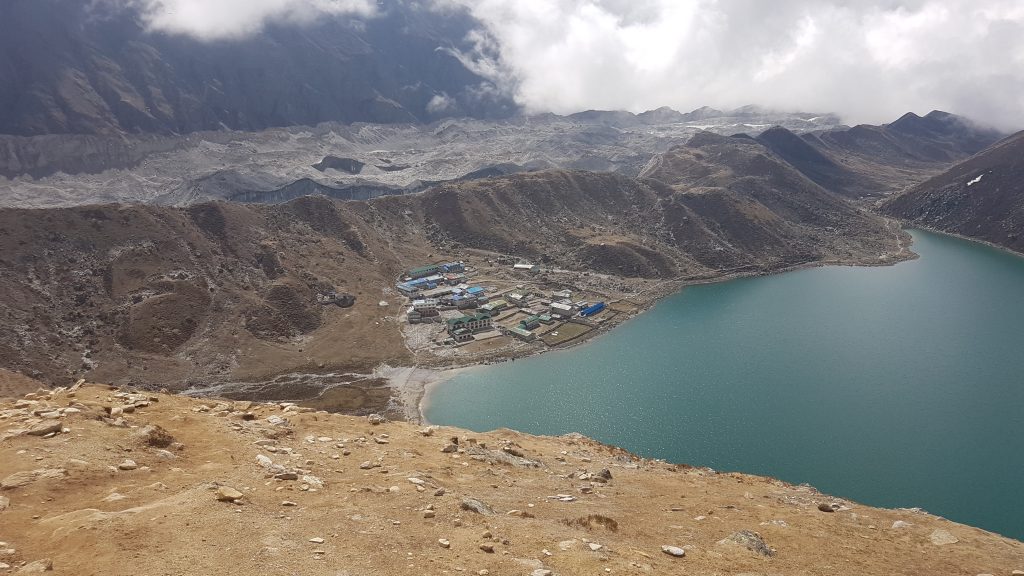 Gokyo as viewed on the trek up Gokyo Ri

A lazy day in Gokyo 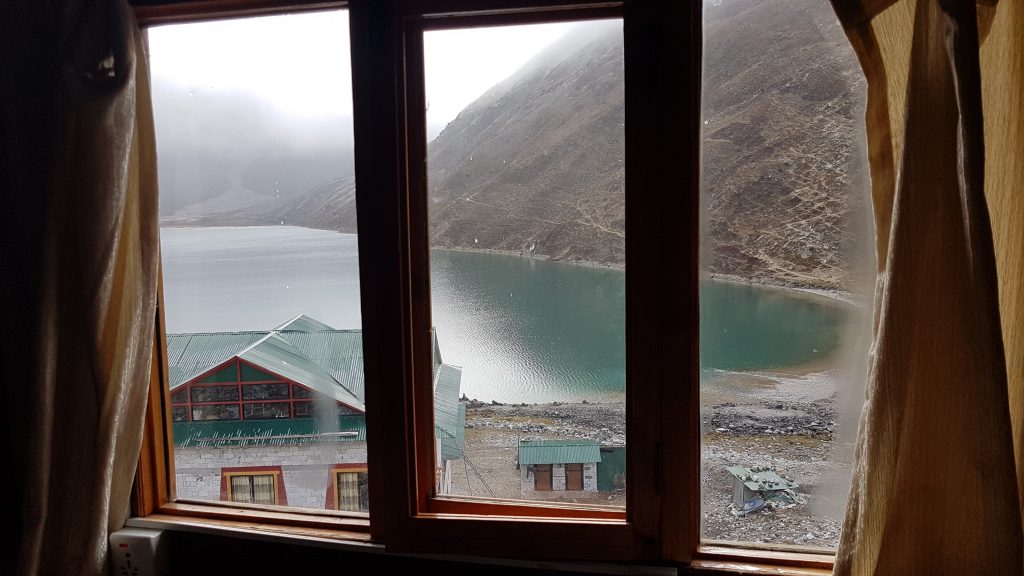 A view from our room at the Fitzroy Inn at Gokyo

Since Chukhung, we had not enjoyed a day where an early start wasn’t mandatory. The group’s only plan for today was a summit of Gokyo Ri and lounging around the lodge. Despite the opportunity to sleep in, it seemed none of our bodies desired it and we all trickled into the dining room by 7am.

It was in time to watch a climber from another group who had been anxiously looking out the window for his ride, scurry out and climb into a helicopter. Taking him to climb Cho Oyu, I surmised.

Also that morning, as I was hitting my water with the Steripen, Jo asked me why I didn’t stir it twice. It was a liter, I was supposed to do it twice. In checking the instructions, I discovered she was absolutely correct. The whole trip, I was being ultra careful with water and yet, not purifying the water for the recommended amount of time. Never got sick, lucky? 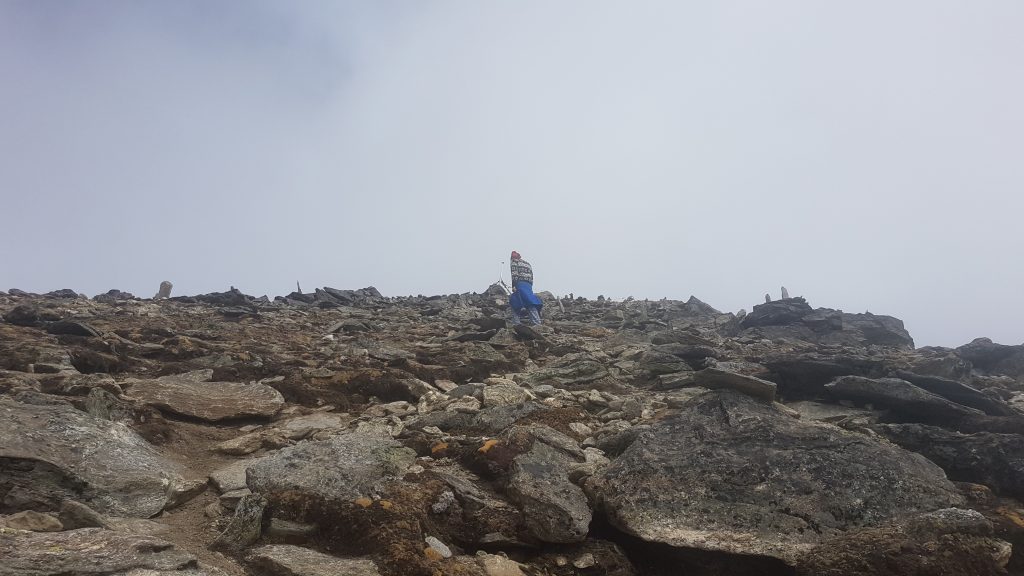 With weather the only factor in when we would climb Gokyo Ri, we all left the lodge at different times to head up Gokyo Ri. I ended up in a group of two with Miles, the world trekker.

He kinda broke my soul and I thought, “If this is how to race someone up a mountain, he has a good strategy.”

He seemed to set off at breakneck speed and then would stop and rest, then again at breakneck speed, then rest. By the time for each rest, I was winded. I would have found a pace I could have kept up the whole way instead of resting, it was only a mile and a half. I wondered if we weren’t climbing together which strategy would have been faster for me. 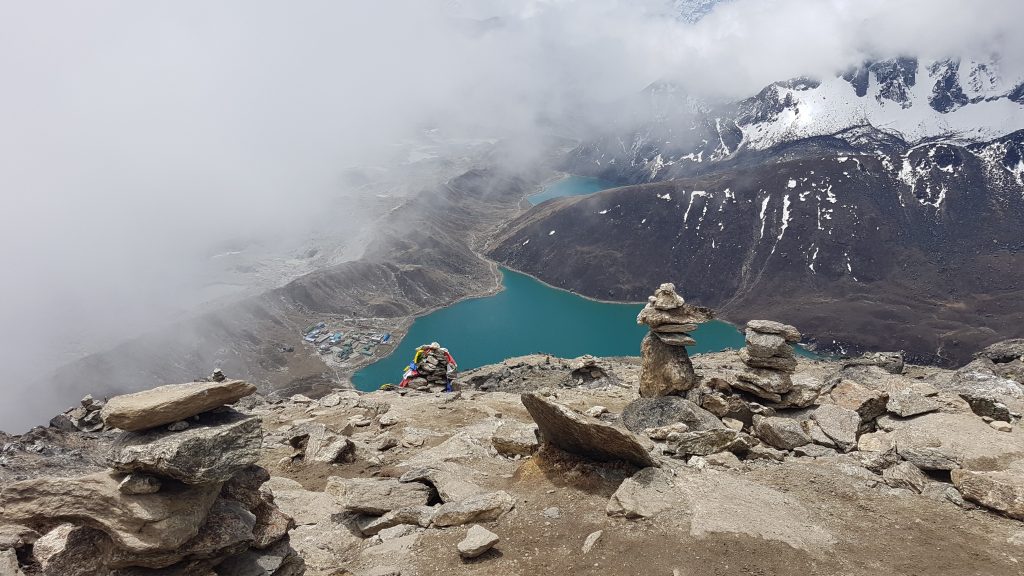 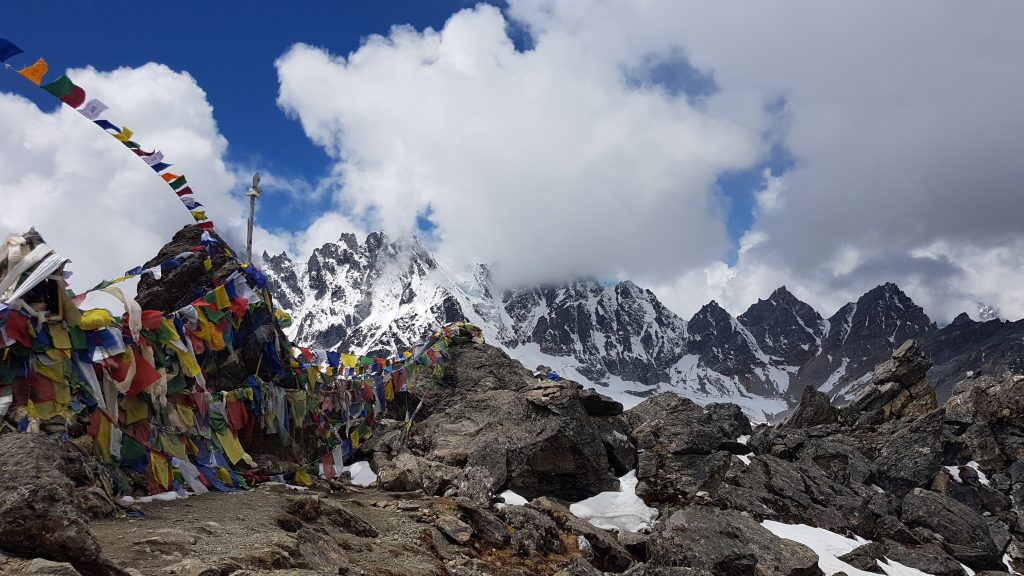 We caught up with the others at the top and traded photos. I got my compression shirt shot. I figured at my age I was running out of time for one of those. Miles got a shot with his puppy dog which was something to do with his social media. I tagged him in one of my photos on facebook and it got more likes than anything I’d ever posted. Made me feel a little unpopular.

The summit of Gokyo Ri was like a rock stacking toy box and was littered with prayer flags and Buddhist idols. I get that it’s a culture thing in Nepal, but it still doesn’t fly with me. To me, it’s akin to littering. If I climbed Mt Whitney and found 15 Jesus crosses stacked on rocks, I’d be ashamed. Though, I’d be unwelcoming to any Nepali who came to a mountain in the states and told me how to treat our summits, so besides this blog post, I’ll keep my mouth shut.

As the rest of the group arrived, we enjoyed our final summit together. It had been a great group to trek with, lacking any drama or difficult personalities, and except for feeling like the old man, I couldn’t have asked for better. 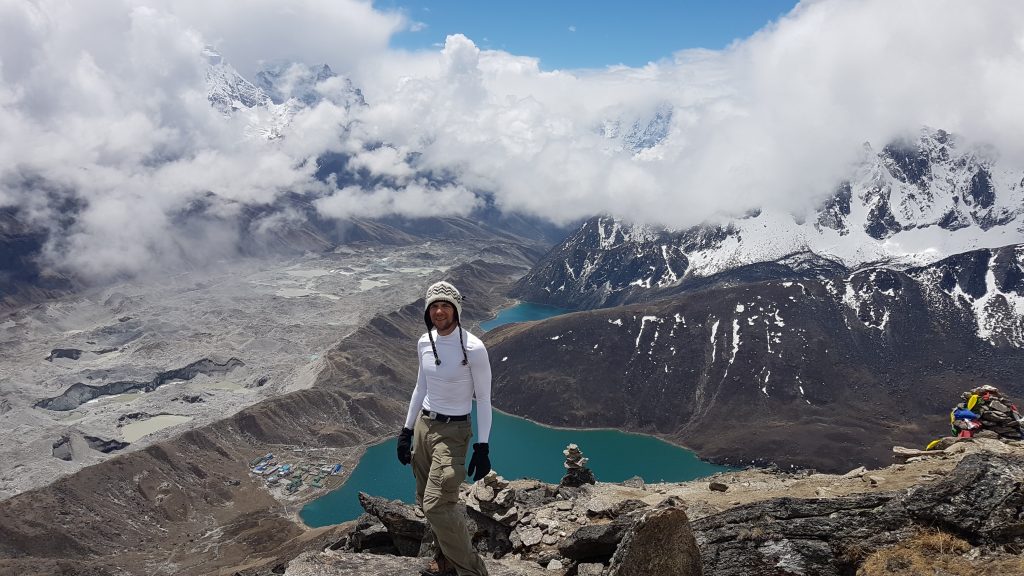 Not sure I’ll ever be that skinny again.

Another evening sitting around a table in a lodge playing cards. It seemed a great deal of the time was spent doing exactly that. The Kiwis had joined us, they likely thought we were hogging all the pretty girls, and reported they crossed the glacier without incident. Thank God for that! 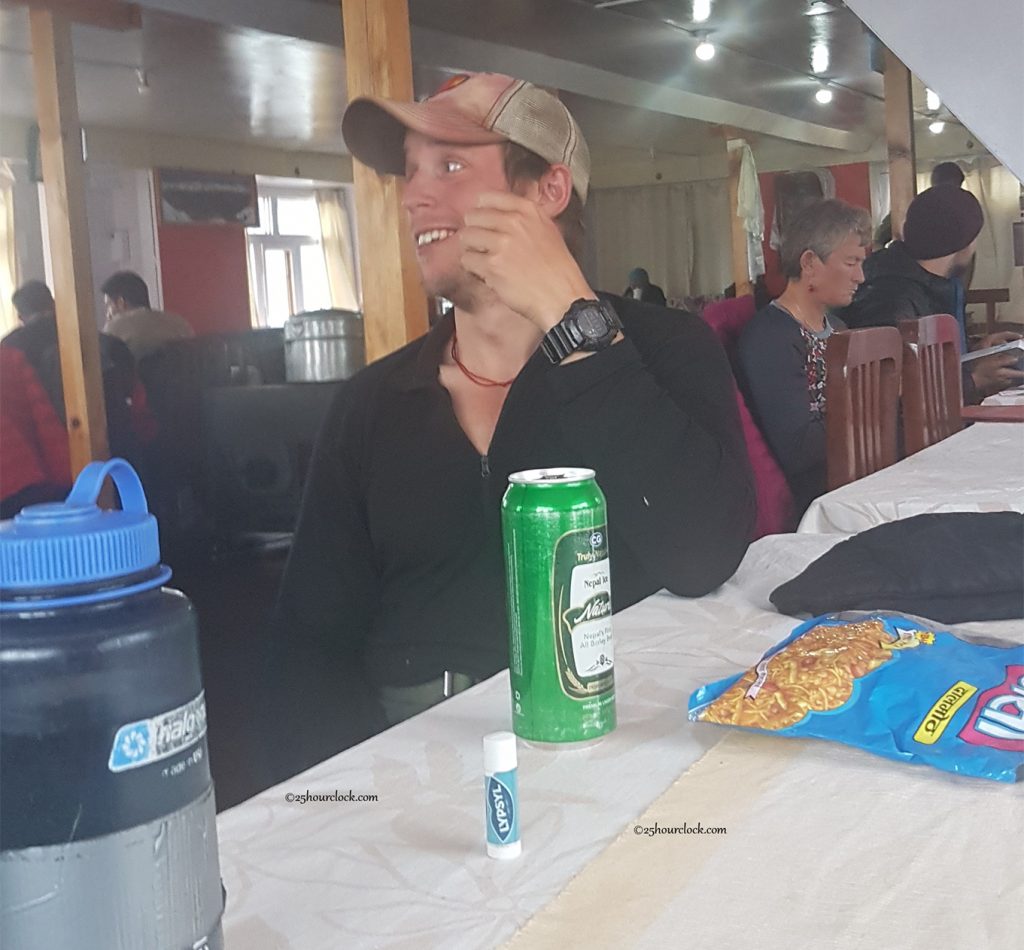 Gaz with a beer. Beer probably gets a bad rap at altitude. Have a beer! “a” beer.

The lodge filled up that night, with climbers and new groups of trekkers. Tashi came around to each table to ask if dinner at 7:30 would be ok. 7:30? That was almost hiker midnight! After everyone had sheepishly answered yes, I inquired whether it was a request or a statement, to which he said, “Oh, only Sherpa Stew and Toast, I can get that out at 6.” Crisis averted.

Lauren joined me with an order of Sherpa Stew and as meals began to poor out of the kitchen, we could tell who was about to eat by who the hot towels came out to first. Lauren and I were first and were relaxed and full well before anyone else got a towel. Tip for your trek: Don’t joke about others being hungry, it doesn’t come off that good, well at least in my case. Lauren could tell a joke about anything and have the room rolling.

That night, we all stayed awake longer than usual with the old man being the first in bed. I had another coughing fit which I tried to hold in as much as possible for the sake of the others in the lodge. It seemed like it was time to get lower. 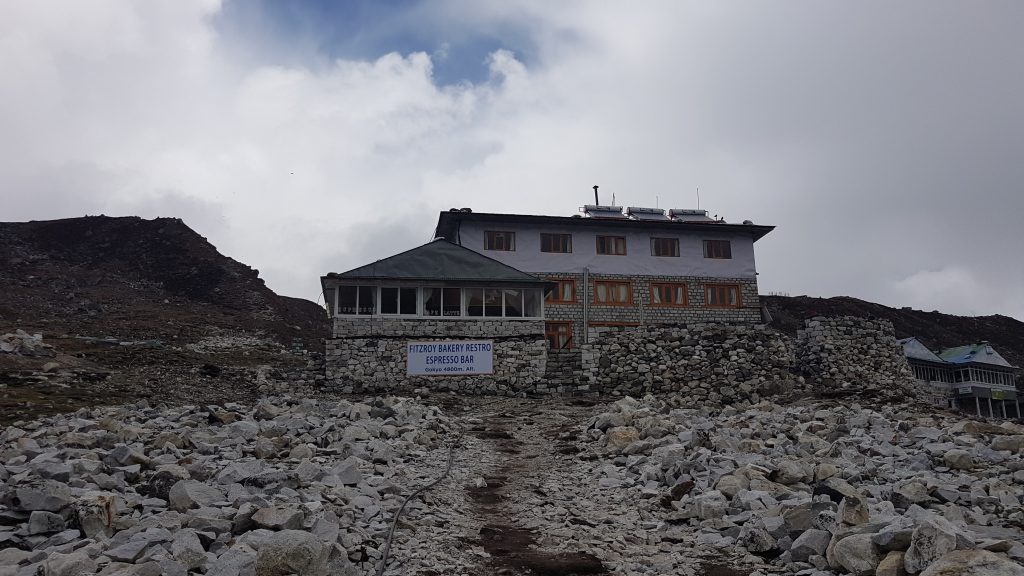 The Fitzroy at Gokyo, our home for two nights.