The hike out of Zonghla and up the Cho La will not be the hardest day, but will be a tough one. By now, you should be well acclimated, and the going will be easier, and you will also know your limits. Like the Kongma La, there is a glacier to cross on the other side, but unlike it, there is a group of lodges prior to it where you can rest up and have lunch or stop for the night if you’d prefer to tackle the glacier in the morning. 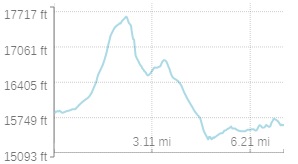 Looking back on Ama Dablam from the trail to the Cho La. Our final look at the gorgeous peak.

It was rough for me tearing myself out of the sleeping bag at 5am this morning with the others. I was developing a bit of cough, probably due to the overexertion the last couple days. I helped myself to tons of fluids, porridge, fried eggs, and Tibetan bread, I figured I’d need the energy. Once we were walking again, I started to feel better at least.

It was our group of 8, the Kiwis, and a few other trekkers we’d met along the way snaking up the Cho La on a bright morning. We were hardened by now, passing the time with tidbits about mountains, Sherpas, Sherpa guides, life back home, and so on, without much care to the strain our legs were enduring.

One of our conversations was about country music, at which time a young kid from Holland called us “motherfuckers” for liking country music. It was just his brand of humor, but we concluded to avoid sharing a lodge with him in the future.

Climbing up the Cho La

Cho La as one

It’s a funny thing that with the different speeds of trekkers that every group tends to arrive at the top together. There were at least 30 people on the pass sharing the joy of reaching the second pass, or for some of them, the first one having skipped the Kongma La. It was another highpoint of the trek sharing that moment with others, and we captured the best group picture of the trip.

The many groups converging on the Cho La. 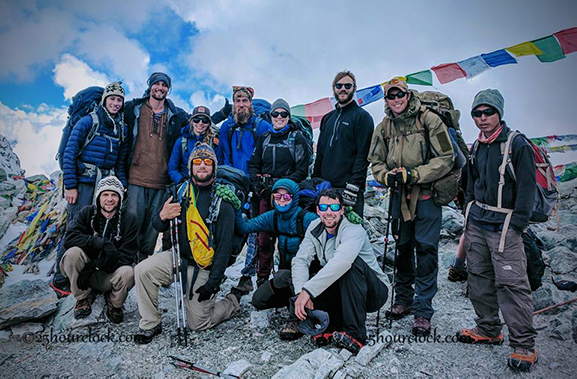 Our group and the Kiwis on the Cho La.

For the descent, some of the groups were putting on microspikes, no doubt urged by their Nepali guides. I’ll never wear them again. I’ve tried them before and they always seem like more hassle then they are worth. If I don’t need crampons, I don’t need microspikes.

Looks worse than it is. Take your time, it’s just snow. Worst that can happen is you fall on your butt.

After a short time, our group had passed the others and I moved on ahead having developed a headache. I was eager to sit down for some caffeine. 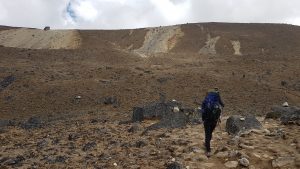 A boring hike into Dragnak before reaching the glacier.

The group of lodges you come to after descending from the Cho La is Dragnak. I eagerly stopped into the first lodge on the right and slurred Ibuprofen at the lodge manager, who turned on the “protect the trekkers” attitude and began to ask me questions about my health. I assured him, it was just a bad day and a headache. 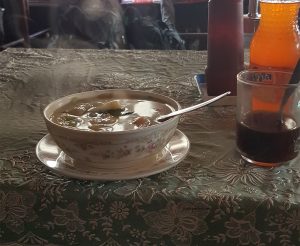 Then I tried the Sherpa Stew for the first time, and wished I had tried it sooner. That, some coffee, and the ibuprofen seemed to fix everything and after the group had come and ate, I was feeling fit enough for the harder of the two glaciers we’d cross on the trek.

Scouting the glacier crossing to reach Gokyo. Just plunge in, I say.

When we reached the Ngozumpa Glacier, or as I would call it, “The one that flows from Cho Oyu,” the group was a bit apprehensive from our last journey through a glacier. We had purposely distanced ourselves from the Kiwis, figuring we’d make our own decisions on getting across.

Taking our sweet time in the glacier. A river of ice is beautiful in its own way. 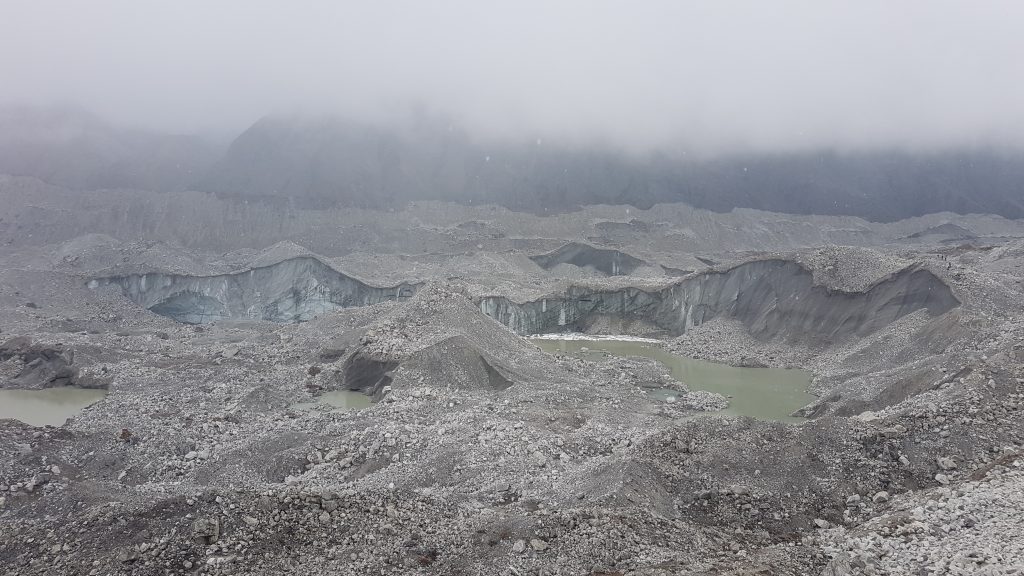 It helped our confidence when a young Nepali man came running through and pointed the best way. Yes, running.

Whereas our last glacier crossing was a hardship, this crossing was an exciting experience, as we took our time probing different paths across. There were worn trails throughout the glacier but fairly obvious ones that pointed toward a hole in the moraine on the opposite side.

As we were beginning a climb out of the glacier, the same Nepali man appeared again running the other way. I high-fived him, wouldn’t you?

After an hour or so, we were through, breathing a sigh of relief.

Where was the Red Umbrella carrying Indian? That would have really made our day.

Ascent out of Glacier.

Descending to the beautiful lakeside town of Gokyo.

Traversing a small hill, we came to Gokyo and looked down on the beautiful mountain lake and small village. Then, we pointed ourselves to the FitzRoy which Lauren had recommended from an earlier trekker’s suggestion. It was on the far side of town.

At the lodge, Tashi, the lodge manager, sold Bryon and I on an upstairs room with a private shower and toilet. Score! At the price of $30/night, it seemed like a steal. 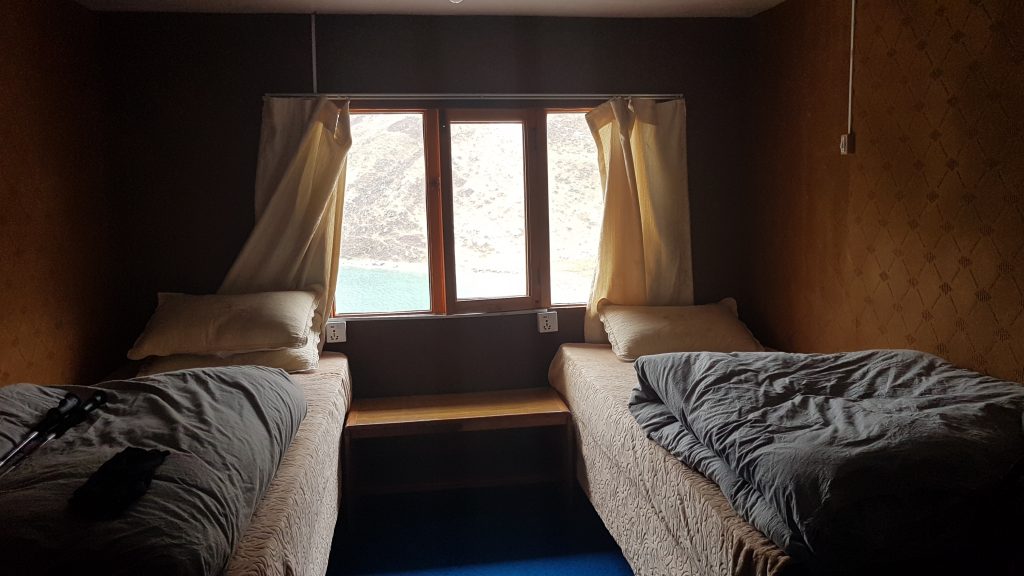 The Fitzoy 3rd floor room. Even has power outlets though they rarely supplied enough juice to charge a battery.

I arrived in the dining hall refreshed after a hot shower and with a stupid grin, which brought laughs to the group.

So far, I had not eaten any meat on the trek, even though the special of a chicken sandwich looked appetizing. Some of the group had it, I passed. Why spoil the diet at that point, especially when everything I’d been doing had kept me free of any semblance of digestive problems.

Besides a coughing spell, I slept like a baby under the lodge blankets instead of my sleeping bag. Why did I bring that thing anyway? Two of the trekkers in our group were going without, their only drawback being that the lodge managers would give them dirty looks when they asked for a second blanket. One of them brought a sleeping bag liner to protect herself from the Nepali scabies… or cooties, I forget.