Easily the best credit cards for sign up bonuses and travel deals are Chase credit cards. However, Chase is not stupid. They are not going to let travel hackers open each of their cards every year for the signup bonuses essentially financing their vacations. So, they only applicants if they have opened less than 5 cards in the last 24 months. If you have opened 5 credit cards, you don’t get approved for any card, from the Chase Reserve card down to the Chase Freedom.

The Chase Reserve is by far the most lucrative card on the market. It has an annual fee of $450, which $300 will be refunded in travel credits and $100 for a TSA pre-check purchase. For the first year, you can even receive $600 in travel credits since these credits reset on January 1, instead of when your annual fee is paid.

Not approved for The Sapphire Reserve

I’m one of many who cannot obtain the Chase Sapphire Reserve. So I’ve actually made the decision to stop applying for credit cards for the next two years. It will still be roughly 18 months before I will have fewer than 5 new accounts on my credit.

The reasons I’ve chosen may or may not relate to your situation, but if they do, you may want to consider waiting as well.

All the banks have some sort of restriction on applicants running through their signup bonuses. It is best not to push it by reopening cards too quickly. I believe getting the Reserve Card in two years and then opening all the other cards again to be a wise move.

I’ve also accumulated a stash of points I’ve yet to use. Though I have plans to use them over the next 9 months (it’s unwise to treat points as an investment), I won’t feel as though I’m wasting my spending until I’m bone dry on points.

While the only activity that greatly reduces your credit score is not paying on time, having a large amount of recently opened cards does negatively impact your score. My plan over the next 18 months is to close all the newest accounts I can and if possible roll those credit limits to older cards (Chase does this for example). Having few cards with large balances and longer history is the best way to improve your credit score.

If everything goes well, I will buy a new home and get the Chase Sapphire Reserve at the same time. Interest rates are going up, possibly much higher over the coming decade, it’s wise to make big purchases now.

When playing the credit card signup bonus game, it’s easy to over spend. For the whole year of 2015, every dime I spent on a credit card averaged 20% back in travel points. Now that I’ll be getting between 1.5% and 2.25% on my purchases, I can focus more on saving.

This is a skill that is easily forgotten when credit card churning. 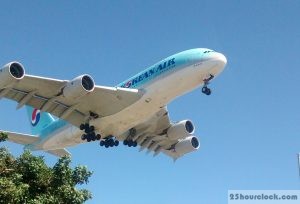 How spend layovers at LAX – Watching jumbos, such as this A380, on approach.

Chase isn’t the only bank

As a sum-up, if the only reason for me to stop opening new credit card accounts was the Chase Reserve card, I would not stop. There are plenty of banks and plenty of cards, from airline cards to business cards to store cards. You are never out of options.