From Pangboche, the normal schedule would be a rest day with climb to Ama Dablam base camp. I’d definitely recommend this as it’s beautiful country. This is what you are here for!

We decided instead to push on to Dingboche which was a short way further up the valley. By far, the easiest day of the trip, casually moving through wide valleys at the feet of the worlds’ highest mountains. 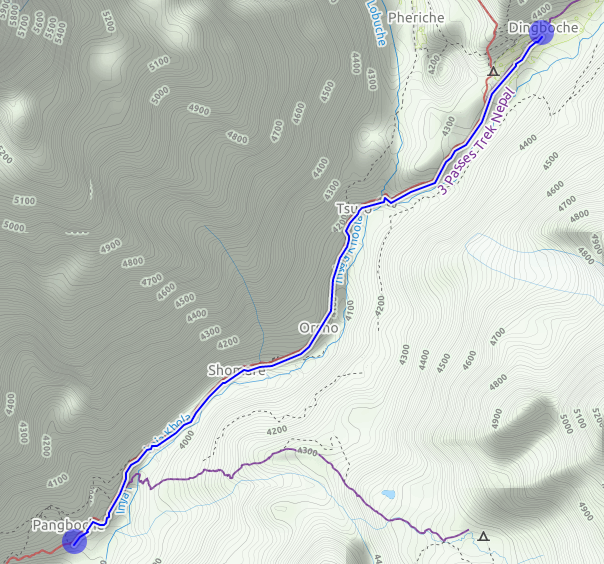 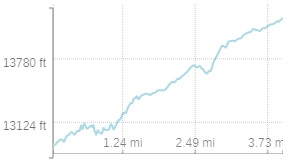 We bid farewell to Tom and his girlfriend and traded some scowls with the judgmental Nepali for breakfast. Tom told us about a dream he had when in Gorek Shep. He was holding a large red ball in the air with only his mind, concentrating intently. As he started to lose his hold, he woke up with a splitting headache. Altitude sickness. He had the headache until he was able to get back to Pengboche. I hoped our trek in from Jiri would spare us from those.

I doubled up on the porridge this morning since I didn’t need to worry about filling myself up too much. Can’t ever have enough fiber. So far, my bathroom visits were as normal as being at home, maybe I’m lucky, but no travel bugs that many trekkers complain of.

The water from the lodge in Pengboche gave me some stomach pains as soon as I swallowed which made me a little nervous. I had hit it with the Steripen as usual. False alarm though, must just be an upset stomach.

Lotse and Ana Dablam are our friends

On this section of the trek, you are never far from a lodge and always in the company of giants

The short trek to Dingboche was in good company. All around were the sleeping beauties of some of the most picturesque mountains on the planet. Ahead of us, we had closed on the Everest massif enough to keep Everest out of our field of vision, but Lotse sat up in the clear sun shedding herself of excess snow in the form of vapor as if a white volcano.

There were not as many trekkers out either. I believe we leapfrogged a couple big groups by staying in Pengboche. We passed an Australian girl traveling solo with her guide and porter  doing the Three Passes as well. We told her we’d keep an eye out for each other. 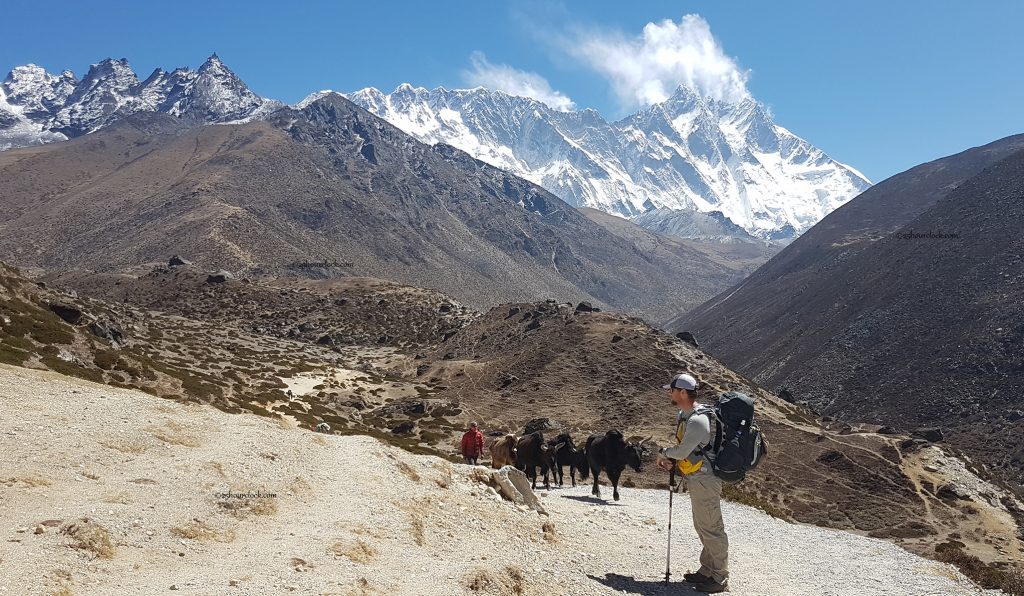 The white volcano of Lotse on the trek into Dingboche

We quickly got to Dingboche even a little early for lunch, though it’s not really ever too early to eat while on the EBC trek. Per our strategy in Pengboche, we pushed through the sprawling little town, with sewage running down the trail, to the lodges on the opposite end. This worked because we were going to Chukhung for the Three Passes. If you were going to Everest Base Camp, the turnoff is earlier in the town so one of the first lodges might be a better choice for you.

We stopped at the Bright Star lodge which seemed new and clean. Having lunch there, we looked at the rooms which were also nice, but as I’ve developed a habit of checking out the toilet situation, discovered they only had one toilet per floor and they seemed pretty busy. I’ll look around.

I found the Hotel Umanga fit our tastes solidly, in fact, the toilet situation was markedly improved having one toilet for every two rooms. Done deal! It was set back off the trail a little even so didn’t seem to be get a ton of guests, it would be a quiet night there for us. By this point, concerning yourself with the quality of the room itself is borderline silly. The important considerations are the toilet and how much company you may have when trying to use it. As for the food, you can check the menus, but since they all list the same stuff, it’s kind of a toss up. When in doubt, go with potatoes.

We found a nice bakery in Dingboche before setting off on our acclimation hike.

Dingboche from the acclimation hike

A typical itinerary in Dingboche would have you taking a whole day to acclimatize and make your way up to a viewpoint. The key to acclimation is hiking higher and sleeping lower. We had a whole afternoon, so we set off toward the viewpoint, even with weather ripping up the valley from Namche.

For the first time on the trek, I experienced the obvious exhaustion of the effects of altitude. We’d been spared any good climbs since Namche and hitting the steep slope above Dingboche put me back to my earlier days as a novice hiker. 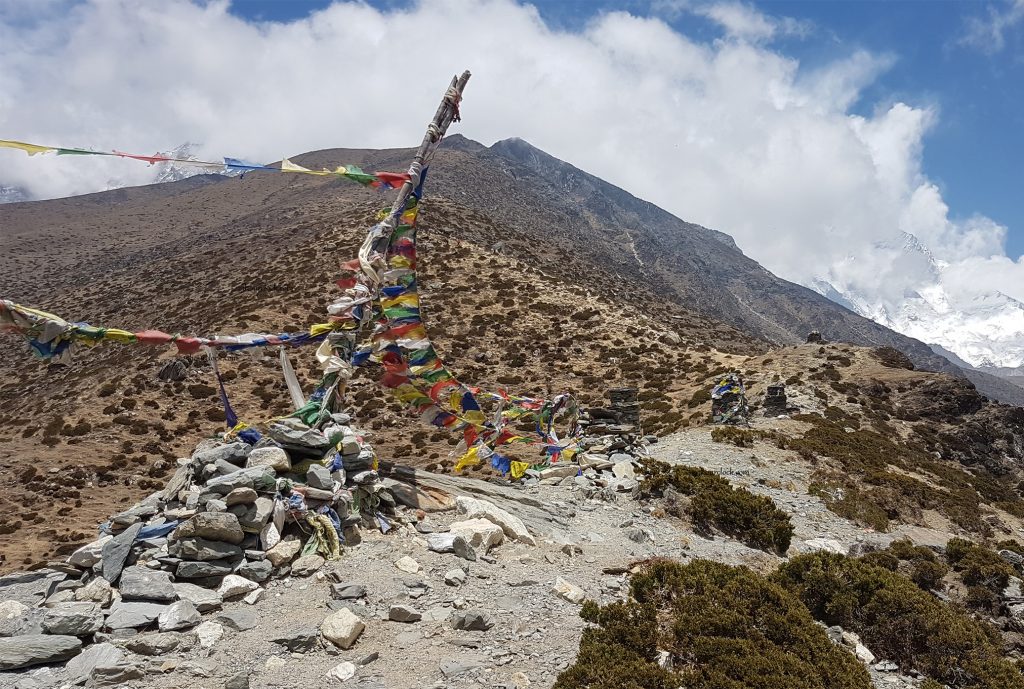 Clouds rolling in quickly on our acclimation hike from Dingboche

Suffice to say, we didn’t make it to the viewpoint, which was quickly being shrouded in whiteout, but we were able to add another couple thousand feet to our trek which put me at the highest point so far reached in my life, just a bit higher than Mt Whitney in California, the tallest peak of the 48 states. I was higher than I’d ever been before in a stadium of giants ten thousand feet higher still. 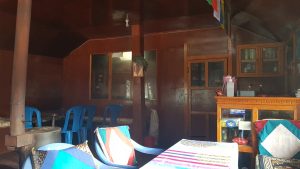 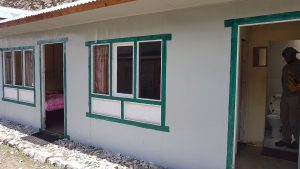 Rooms at Hotel Umanga in Dingboche

After the hike, I had to lay down, so I climbed into my sleeping bag with all my hiking clothes on. For the first part of the trek where it was warm, keeping clean was just a minor problem. I could splash some soap and water on myself and towel off and stay relatively clean, but now that it was colder, staying clean meant freezing and became unnecessary. At least no one would smell me wrapped up in my sleeping bag in a small hotel in Dingboche. I drifted off and caught a quick nap.

Later that night, we joined up with a couple American trekkers in the lodge who were the only other guests and played cards with the lodge manager, a young kid named Tahk, who was a vibrant and friendly young man. We all took a liking to him, and he didn’t even own us in his card game, that none of us knew how to play.

The card game was Dhumbel, and I couldn’t tell you the rules even the next day. I tried to explain to Tahk to get the trekkers playing for money, but I’m not sure if gambling was in his vocabulary. Lucky him.

He recommended Theksa instead of the Dal Bhat. It was a kind of soupy noodles and was probably good for my stomach but wasn’t incredibly tasteful. Taking the lodge manager’s suggestion so far on the trek had not worked out all that well for us. When in doubt, go with Dal Baht.

That night, I didn’t pass out like every night up to it. Maybe it was the nap, maybe it was the altitude. I did catch Kangtega in the moonlight on a midnight stroll.

Kangtega in the moonlight on a midnight stroll from Dingboche