For the first time out of Jiri, you will be trekking through the giant mountains of the world. Ahead of you will rise the Everest massif with Lotse standing in front of the black peak of Everest herself. Perhaps more magnificent will be the slender cone of Ama Dablam which will dominate most of your views for the next two days.

The trek won’t tax you that much, you’ve done much harder climbs before here. The only concern is altitude and how much time you want to spend in one of the most beautiful places on earth. Stopping in Tengboche is a popular option with a prayer flag trek for an acclimation day. Pangboche is another option which provides a side trek to Ama Dablam base camp.

The trek in from Jiri provides more flexibility having already given your body several passes above 9,000 and the Lamjura at almost 12,000. We decided to head straight for Pangboche and ditch the acclimation day altogether. 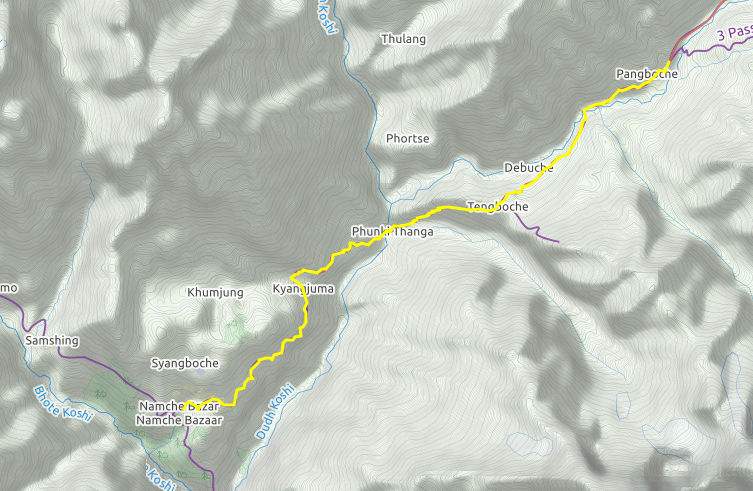 It seems the entire town left for Everest Base Camp with us this beautiful morning. So far, weather had not been agreeable, but the skies opened for us. The path was well built and well-traveled, carved into the side of the steep mountains with a view down the valley of the Dudh Koshi.

Our first view of Mt Everest on the trek out of Namche.

Not fifteen minutes out of Namche, I let my eyes drift upward as we rounded one of the first bends, and what I saw stopped me in my tracks. There it was, the unmistakable black peak of Everest peeking out above a cliff of ice, with its ubiquitous cone of snow blowing off from the overhead jet stream. The highest peak in the world, the mountain I’d traveled around the world to set eyes on was laid before me on a glorious morning. Oh yea? So we done then?

We spent a good deal of time taking pictures in front of Everest, Lotse, and Ama DaBLAM, pointing them out to some of the clueless trekkers passing by us, and then… we passed them back. We flew around most trekkers who were busy dealing with altitude and well, other physical problems. Zombie train from Lukla.

All except the soccer-shorts Irishman who caught up with us at Tengboche, still in his soccer gear but carrying a heavy down jacket under his arm. Good call. 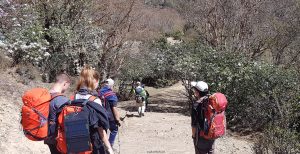 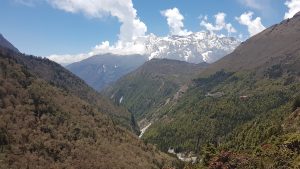 Looking back towards Namche

We were early for any sort of ceremonies in the monastery at Tengboche. Apparently, there’s a ceremony most days at 3pm that everyone is welcome to attend, but I still took a stroll around and there was a nice monk who must have been on tour guide duty. I was not allowed to take pictures in the chapel, but he left me alone there… chickened out of a taking a picture though, not really the time for bad karma.

Afterwards, it was a bakery, nothing like cake and bread to get a trekker though the day. Oh, did I mention the espresso? We were getting spoiled since Namche. That’s probably the real reason people fly to Lukla, so they don’t have to slum it with instant coffee. 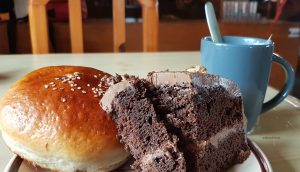 Lunch at the Tengboche bakery

The skies graced us the entire day with blue skies and we continued our march deeper into the Himalayas shortly after an hour-long lunch we spent bullshitting. At the pace we were making, we were no longer in any rush.

Ever seen a female Buddhist at a monastery? Nah, neither have I. Down the trail a little ways from Tengboche, we passed by the Nunnery. I think it’s safe to say the Monks get most of the funds… I’ll leave it at that.

While most of the hike from Namche was through hillside shrubs, the next stretch to Pangboche was through a peaceful rhododendron forest, which gave way to pastures separated by rock fences and a few yaks here and there until we reached Pangboche.

This stupa on the way to Pangboche has seen better days!

On approach to Pangboche.

Pangboche is a spread-out town and it took us 15 minutes to walk from one end to the far end where we planned to find a lodge.

During this time, an obvious climber, due to his repaired nose and lack of a few fingers, walked with us. He was a friendly European and gave us the skinny on some of the lodges. Alas, the lodge he pointed out seemed a little busy for my taste.

I’d later discover that climber was a Portuguese named Joao Garcia, the first climber from Portugal (and one of a small elite group) to have climbed all 14 8,000 meter peaks sans-oxygen. He spoke to us as if we were part of one big club of mountain lovers. 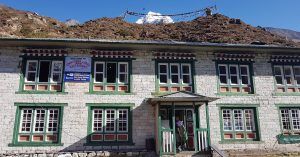 As we were hunting for a better lodge, we knocked on the locked door of one lodge who answered and told us the fee was $205USD. Called the Summit Lodge, it catered to the more demanding of trekkers. Yea, pass.

Just how much better could it have been than the Shreedwa Lodge we decided to park in, couldn’t tell you, but as I was looking at the rooms, a rather rough looking man with a full face of hair stepped out and eyeballed me. I did a double-take the way someone does when they are being stared at. What’s the problem, buddy?

The walking hairball was Tom from lunch in Kathmandu a whole life time ago. Man, did I look like that? Yes, ok, so I probably did. That night, he regaled us with his visit to the Khumbu Icefall. We’d be there shortly.

The Pangboche Lodge was a pleasant stay, good food and good company. That is, except for the Nepali who decided to chastise us for traveling without a guide. Do I look like I need a guide? “Kongma La, very dangerous, if you get bad weather. Snow, Ice!” Oh my god! Don’t tell me! Snow? Ice? What the hell am I going to do?! AHHHHH! 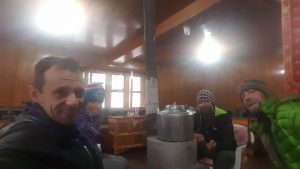 Our evening spent around the yak stove in Pangboche.