Looking back on Namche from the beginning of the climb on the acclimation day.

Acclimation is key to your enjoyment on the EBC portion of the trek. Though trekking in from Jiri gives you the opportunity to push on the next day, it’s not something you should risk. You are on vacation and your enjoyment will highly depend on how well you feel. Besides, the country around Namche is beautiful, soak it up! 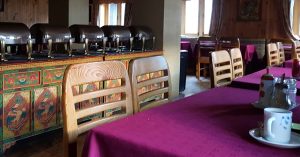 Nepalis aren’t too big on slaughtering animals, so meat isn’t exactly a staple of the menus anyway. Besides that, I constructed all my meals with intentions of keeping my bowels in good shape – avoiding spices, avoiding overeating, avoiding grease, and avoiding food types I wasn’t used to.

The SherpaLand Hotel had real oatmeal. I helped myself to a large bowel of it along with some Tibetan bread. Oats, usually as porridge, and Tibetan bread had become my breakfast of champions. It was filling but not too heavy and supplied me with plenty of energy.

We were the first into the dining hall that morning with a Nepali guide joining us shortly after who told us he was guiding a large group to EBC. He approved of us coming in from Jiri, saying it made the acclimation much better. Some of his group was already experiencing altitude sickness after flying in from Lukla and going directly to Namche. He said it was normal and would subside by the end of the first day. I’m all for skipping the altitude sickness completely and adding 7 days, I thought.

I asked him what the best peak would be to climb for a beginner. His answer: Mera Peak. I’d heard that before. New bucket list.

Not too eager to rush out of the hotel, we didn’t get started on our acclimation hike until 8:30am. Clouds were already flowing into the valley, so we didn’t expect much of an Everest View. Again.

We still had not caught a glimpse of Mt Everest.

Some trekkers brought their backpacks for the acclimation hike, but I didn’t see a need. I clipped my water bottle to my belt and off we went. [ See Gear List ] It was nice skipping over the steps with no backpack. We were flying! I felt so light I thought I could do a Crouching Tiger up the mountain!

After ascending the well belt stairs on the trail out of Namche, we passed an air field, which was built in the 80s with the plan to fly tourists straight to the Everest View Hotel. Their idea dried up quickly when one of their rich guests had a heart attack on the steps of the lobby. Now, it’s used to carry supplies for some expeditions. 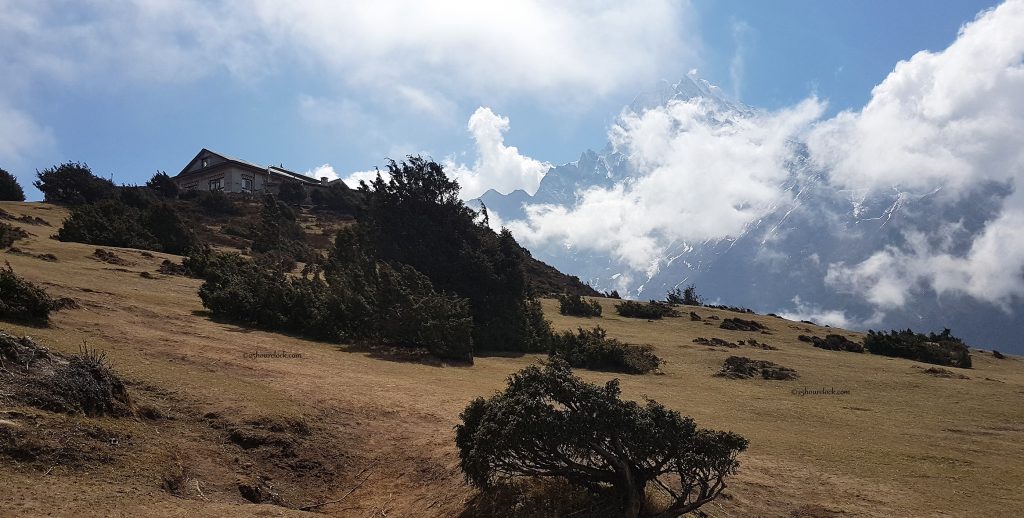 Themserku on the hike above Namche

We passed yak pastures as the trail weaved its way to the edge of the hill where we should have been afforded views of the Everest massif, but instead only got a short look at the peak of Ama DaBLAM and Themserku. Ama Dablam should always be pronounced a-ma daaaa- BLAM! 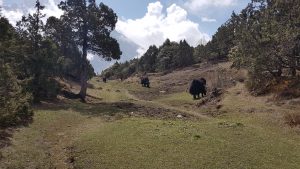 Hotel Everest View on an acclimation hike from Namche

The structure of the Everest View Hotel was nothing like anything we’d been in yet, even in Namche. It was built with foreign style and well-constructed with steel and wood. Just out of curiosity, I asked the price of rooms.

The restaurant was equally expensive with our milk tea running twice as much as our Namche lodge, though I had not seen a “Cucumber Salad” on any menus so far, that’s certainly what I’d order. Couldn’t really afford anything else anyway.

We relaxed with the multitudes of other trekkers and climbers watching for a break in the clouds, which never came except for the occasional sightings of the unmistakable crown of Ama Dablam. 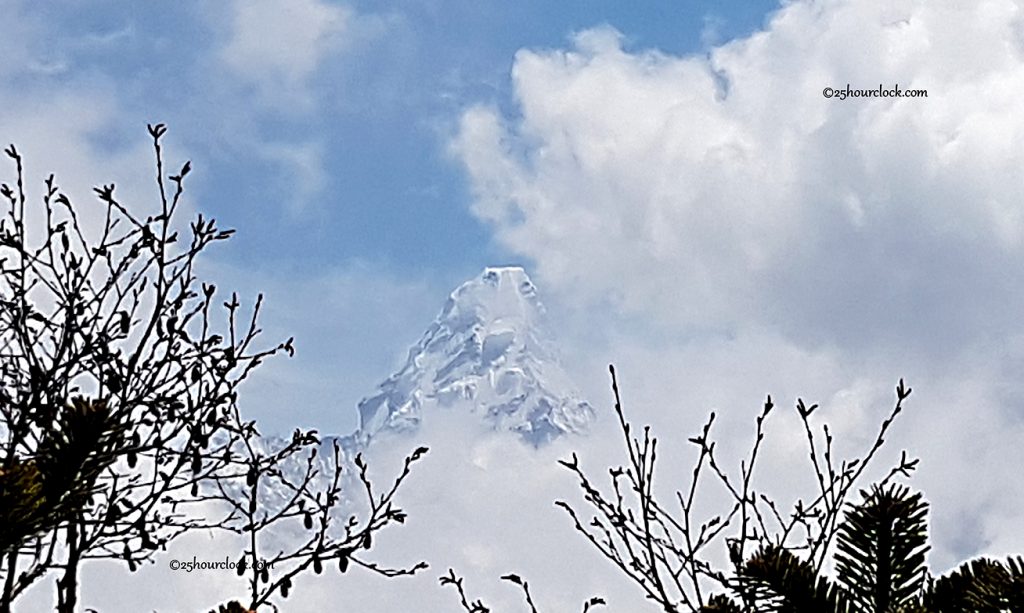 Ama Dablam would occasionally poke through the clouds on our acclimation hike. 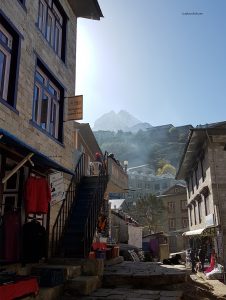 Themserku rising above the streets of Namche.

That afternoon, we enjoyed Hummus at the Sherpa Barista Coffee shop. It was so amazing, I can taste it to this day. Then, we set off to scour Namche for the cold supplies we needed to augment our already overloaded backpacks. I had to drape the down jacket, which I didn’t really need at all, over my pack.

Of all the things I picked up, all cheap Chinese knockoff supplies, the only item I used were some cold booties and of course the can’t-go-without Sherpa Hat. At $4, there was no better deal in Namche than the Sherpa Hat. The items I didn’t really use: Down Jacket, gaiters, heavy gloves.

I also picked up some ibuprofen and cough drops, just in case. The cough drops ended up being a lifesaver after hitting Gokyo as I finally developed a bit of high-altitude dry cough.

We also found a hotel who would wash our clothes and have them ready the next morning. I’m all for clean clothes on a trek!

That night, we enjoyed some custard and apple pie in our guest house while a large EBC guided trek group were listening to their guide going over the basics and making it sound like every decision they were about to face was life-or-death. It’s just hiking. 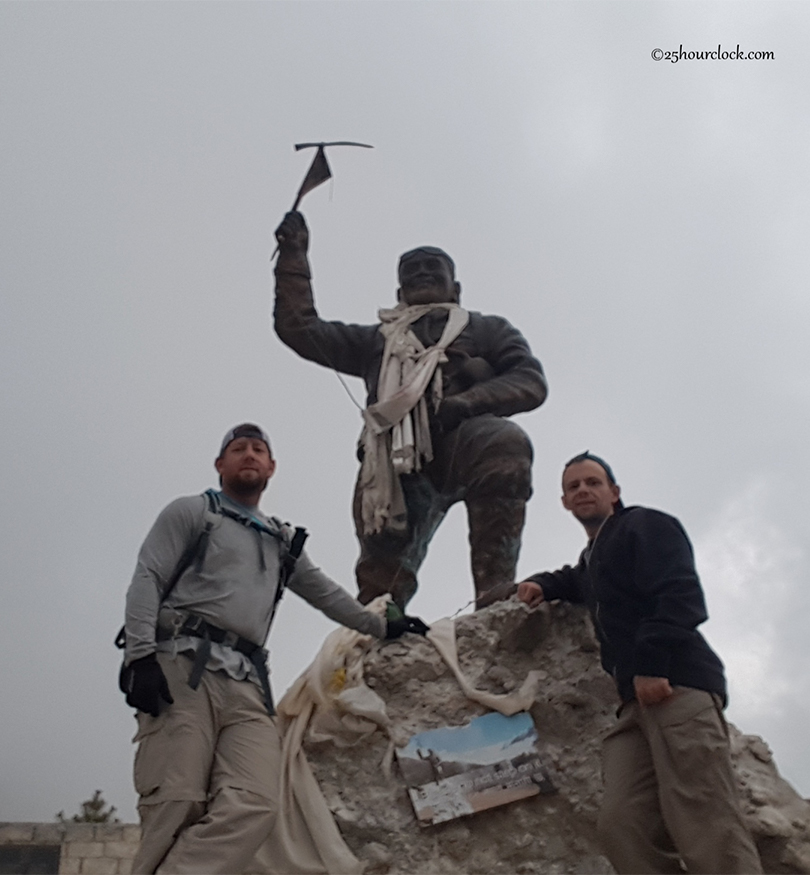 On the round hill top next to Namche is a museum and statue of Tenzing Norgay.