Big day today. Prepare to meet with more trekkers of a wide range of fitness levels and goals, and prepare for a long slog uphill on the way to Namche.

The trek from Jiri is for real trekkers, travelers who want a real taste of Nepal culture outside the comforts of well-established Inns. And travelers who can’t afford the plane ticket. 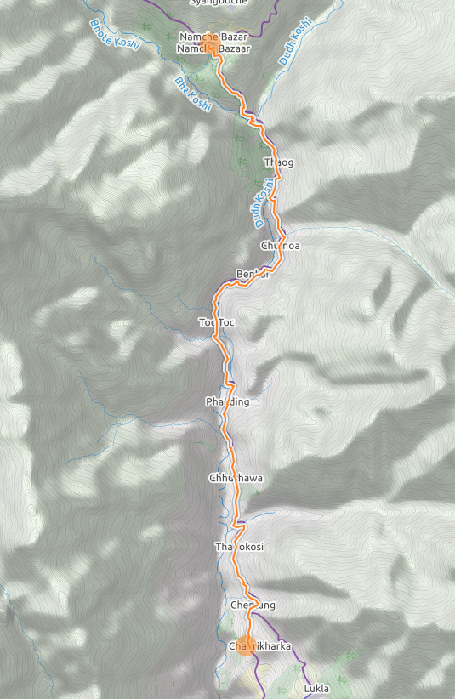 Day 7 – The trek into Namche 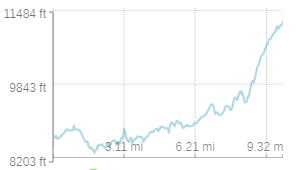 Lukla and the real tourist trail 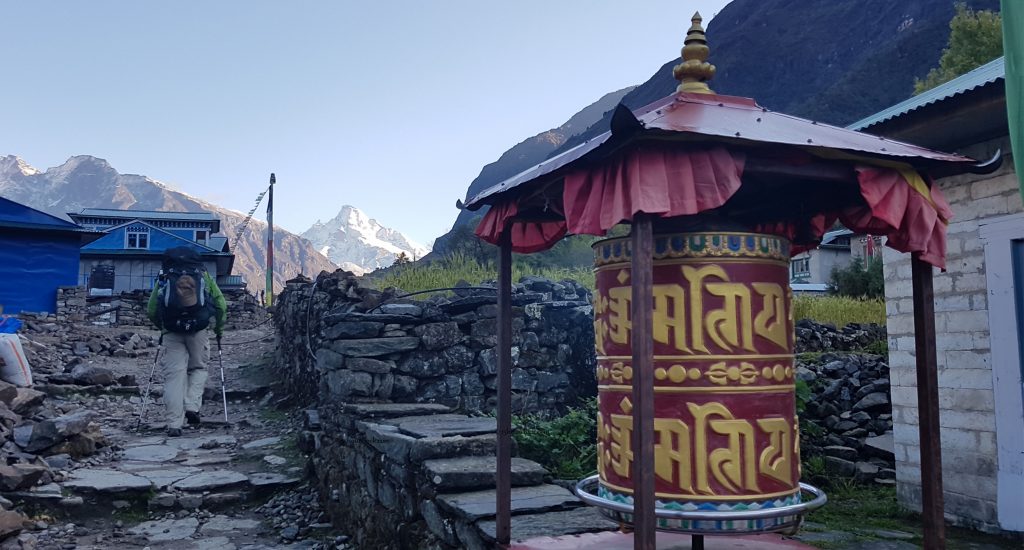 Prayer wheels became commonplace on this section of the trek.

We weren’t out of our lodge for an hour before we met up with the trail going from Lukla to Namche, and though we didn’t run into the “Zombie Train from Lukla,” we did quickly come across lodges that seemed of another class, with advertisements for hot water and private bathrooms and such. Maybe we should have kept going a little, though our last night’s stay cost us only $23, we’d probably pay double that for the rest of the trek.

Most of the trail was built with stones, and prayer wheels became common when we’d hardly seen any up to that point. We had abruptly left Hindu country and entered Buddhist country. I couldn’t help but think Buddhists were less concerned with natural beauty having sprayed their prayers all over the rock faces.

Trash seemed to disappear though, there was obviously more care taken to clean this part of the trail. The rain was gone and we enjoyed a beautiful 60 degree day up to Namche. 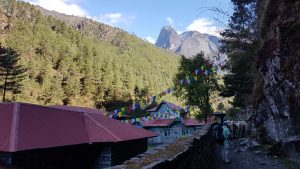 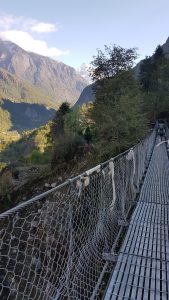 Many suspension bridges on the trek from Lukla 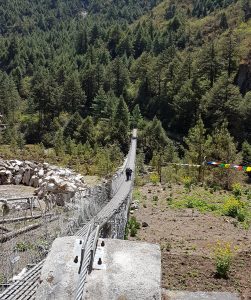 Suspension bridges are an attraction of this stage of the trek 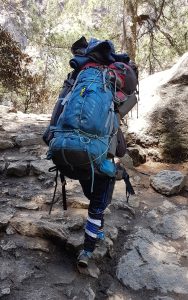 You will be sharing the trail with many porters. 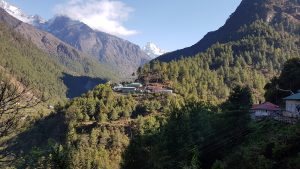 Pray for good weather as the scenery in this section is beautiful.

The monjo checkpoint. For the solo trekkers, it’s a quick pass through.

Arriving at the permit checkpoint, any thoughts someone might have of sneaking past were probably squished. You’d have to climb up a steep hill and hike through brush to get around the big army guys with guns.

We already had our permits so it was easy sailing for us, but who did we meet up with? None other than Miles from a few days ago, the hairy faced traveler that left us in dust.

The checkpoint was busy and we were happy to be through there, with Miles in tow. He hung with us instead of the multitudes of fresh trekkers just off the plane. We stopped into a lodge on the river to take in some fried rice and enjoy the beautiful day. 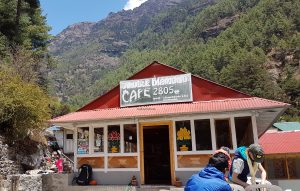 Our lunch stop on the way to Namche. 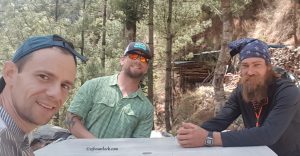 Bryan, Miles, and I having lunch just past Monjo

Miles was a character, he’d been traveling for almost a year with just a backpack and the same pair of clothes. He’d long since quit caring about things such as showers and shaving. He regaled us with stories of trekking in Iceland, France, and Australia on a sparse budget, though he did have the cash to stop into Lukla for a Buffalo Burger, which I think set off Bryon’s taste buds. I was happy with the vegetarian diet so far though.

Another crazy character we met that day was a gangly Irishman wearing soccer shorts, running shoes, and tank top and carrying only a flea market school backpack. He said he was doing the whole Three Passes trek, but without a sleeping bag or many of the comforts we had brought along.

“I’m good with Irish winters, I can handle this.”

He figured he would be fine in the lodges on bad weather days, and that he’d pick up a down jacket in Namche. To each his own, I want my layers.

As we were approaching the climb to Namche, a rather beautiful young lady appeared, with swollen lips and blonde hair, wearing brand new Columbia clothes, and with her hands draped over the shoulders of a Nepali guide. She looked like she was utterly exhausted from going through some kind of hell, though took the time to put on a bit of makeup and make herself look presentable.

Then behind her… was her friend in much the same state.

Behind those two was an older chubby man also wearing brand new outdoors clothing. At least he was carrying his own weight though he also looked like he was ready to get the hell back to civilization. I couldn’t help but think… 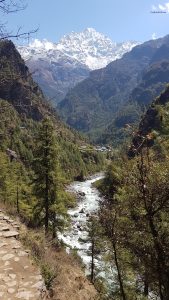 A picturesque view on the trek to Namche. Themserku is the peak (but don’t quote me).

Final stretch of trek before the double suspension bridge.

The climb to Namche

Then, it’s up. The three of us enjoyed our climb conversing with each other and the occasional porter taking a rest with his 150 pounds of gear. Most of the porters used a basket that would be filled with essentials such as coffee and paper towels, and carried a support stick they could use to rest their pack on. It was a simple yet elegant system for ferrying loads.

Mules mostly disappeared having taken a lower path. The few pack animals we saw at this point were usually yaks, which we’d be traveling with from there on.

I like yaks more for some reason. They seem… smarter.

Waiting at the Namche Checkpoint. Why bother? Beats me.

Halfway up the trail, we ran into a permit checkpoint. What the purpose of that checkpoint was, I still don’t know. There was a jumble of people waiting for a lone permit officer in a hut to stamp their TIMS card. It seems we could have easily bypassed it, but instead we joined the party.

As climbs go, it was a fabulous climb, complete with camaraderie with fellow trekkers on their bucket list hike, friendly (and some not-so) porters, and some amazing views as we climbed towards 12,000 feet.

The metropolis of Namche Bazaar

The view when entering Namche for the first time

Namche in person is even more majestic than it is portrayed in movies.

Our trail arrived into Namche at the base of the amphitheater that its stone buildings sit on. Above us was a thriving city catering to trekkers and climbers who traveled here by the thousands every year.

It’s the Hill-Ten he was referring to. Bryon and I were not really the kind of guys to accept the offer of the first person in the city. Instead we strolled through the lower streets checking out various lodges with Miles.

We thought we’d look for a little better room for the couple nights we’d spend in Namche. Miles ducked in the first one that he found the menu prices acceptable.

For us, we settled on the SerpaLand Lodge in a room with a private bathroom and hot water shower. The furnishings and tiles and such were of a quality that they’d fit in any Kathmandu hotel. For splitting $30 per night, we thought it was a hell of a deal. 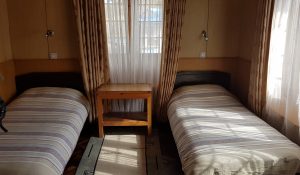 That evening, we met Miles at the Sherpa Barista Coffee Shop. For the middle of the Himalayas, the coffee shop was luxury. It would have been right at home in Manhattan even. It had clean plush booths with a nice ambiance and big HDTVs. I went for cheesecake and espresso.

Cheesecake and Espresso! Heaven after 7 days of hard trekking!

Listening to Miles regale us with his travels made me long to quit my job for a year and travel as he did, though I’m not sure I’d have the stamina to live in a tent for such long periods. A month of traveling from lodge to lodge in the Khumbu? No problem. A month of camping in the Australian Outback? Gets a little iffy. I did admire his freedom though. His life for the year was as carefree and happy as a person can be. 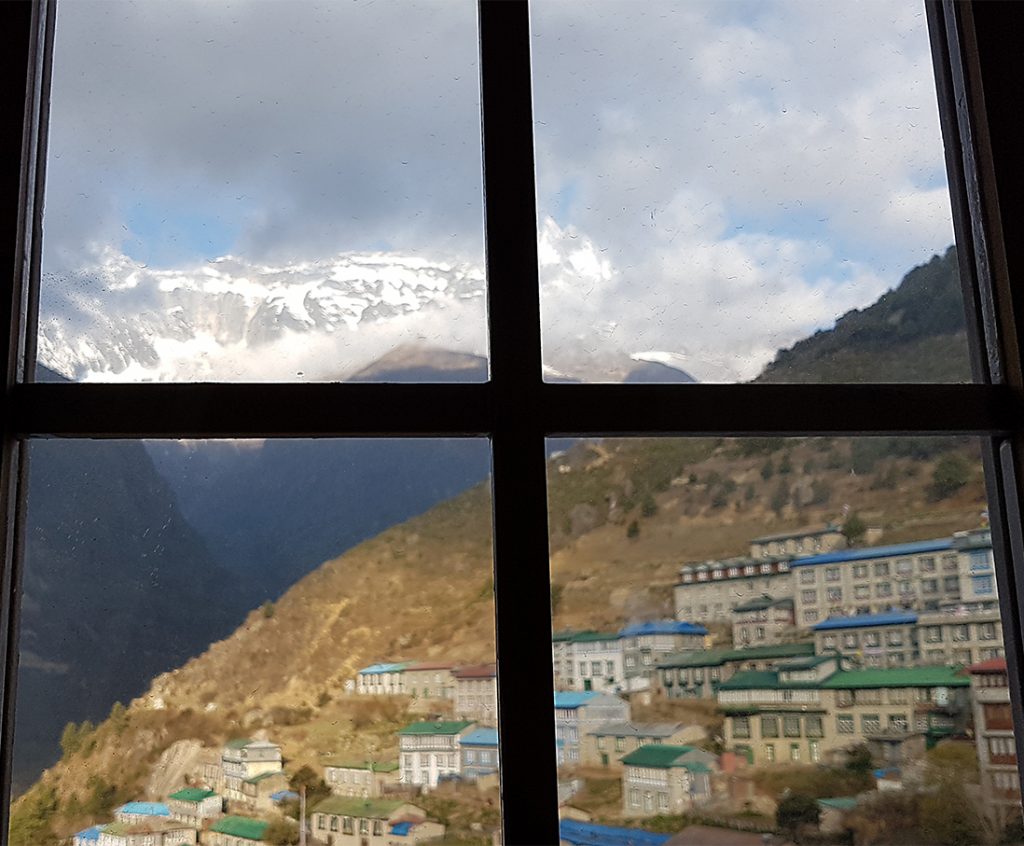 The view from our room at the SherpaLand Lodge in Namche