The views will be like what you’ve been experiencing so far though you will begin trekking in the canyon that runs to the Khumbu and the industry that supports the Khumbu will be trekking with you. I.e. Mules.

This will be the last full day trekking outside the normal Everest Base Camp trek. 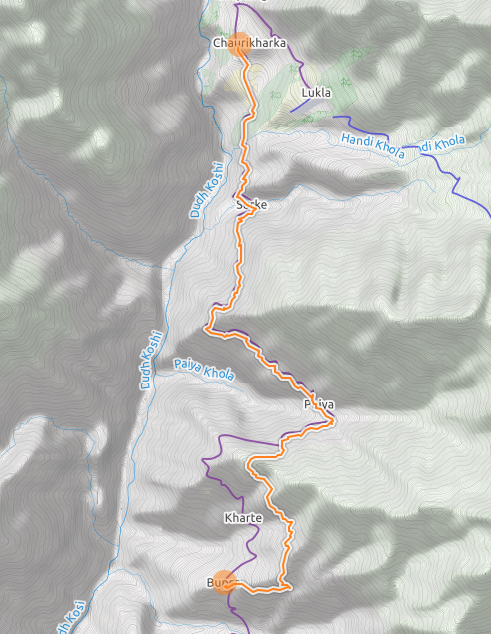 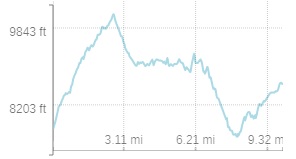 The road out of Bupsa was a regular Nepali freeway. Most were simply going about their business. We passed a group of girls who were going to school. They said it was an all day walk and they would stay at the school. The older girl who looked 13 was wearing bright fashionable clothes that perhaps a Korean school girl would have worn. She had someone to impress!

Of all the pics to come out blurry!

At one point, while we were gingerly making our way around a mule train, an older lady (55ish) with a massive backpack skipped around the outside of the trail and weaved through the mules and Nepali mule handlers. We exchanged some waves, but like Miles before us, she was gone. When I’m that age, I want to be in that kind of shape. Sheesh, who am I kidding, I’d like to be in that shape at any age. 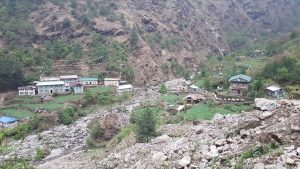 Our lunch stop on Day 6 before the sky opened up. 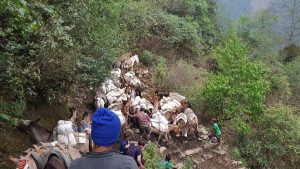 Mules are not the brightest animals. 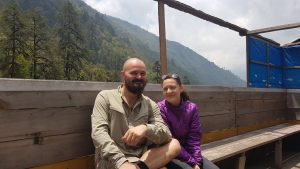 Dane and Ally – Another pair of awesome people I neglected to get contact info for!

After a slog up the mountainside from Bupsa and then a leisurely walk along the side of it, we came to a grouping of lodges in a hamlet called Serke. Passing by one of the lodges, we came across Dane and Ally who we’d been leap frogging with since Day 1. We exchanged more pleasantries such as “These mules suck” and “Damn, how you keep your boots so clean?” Same kind of small talk as home.

Dane explained he had spent a good chunk of change on a pair of leather boots in India, but that the instructions explicitly said “Don’t step in feces.” Something about it eroding the finish on the leather. Mud was ok, but feces… nah. I told him to just give up, find the next pile of mule shit and sink your boot into it so you no longer need to think about it.

Leaving out of Serke, we passed a chubby American going the opposite direction looking rather panicked. We stopped to see what the problem was. He asked us anxiously, “You’re not going on are you?”

Baffled, we looked at each other as if to ask, “was he really afraid of the rain?”

It did look dark and gloomy ahead as if the rest of the day would be spent walking through the rain. We again donned our Marmot rain gear and pressed on to Khauikharka in a downpour. [See Gear List]

When we finally reached a selection of lodges, Bryon was apt to press on but I mutinied on him and we stopped into the most inviting lodge and who did we find? None other than the skippy lady from early in the day. She was from New Zealand, her name was Jane. Oh great, another Kiwi. 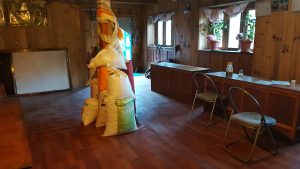 In the Mt Everest Guest House or Everest Guest House, or something Everest. I get them confused, lots of Everest this and Everest* that guest houses, we continued with our normal habits of Milk Tea and Dal Bhat. Wasn’t the best Dal Bhat I’d had on the trip, but the company of the guest house was more pleasant this time. In Bupsa, we lacked anyone to talk to.

Jane seemed much more level headed than her country woman in the earlier guest house, though she still tried to read me the riot act about purchasing a Fanta, which was in a plastic bottle. Plastic bottles of course would single handedly destroy this beautiful country. Sure, I’d seen plenty of plastic bottles littering the trail since we left Jiri, but that is a product of no one picking them up. The reason we don’t see them all over the ground in America is because we have trash crews. I was sure the nice old lady running the lodge would make sure the plastic devils found their way into the rubbish. I was also sure that Nepal, and even the Khumbu, had managed to advance far enough technologically to have discovered the idea of landfills, and even a service to carry everything to the landfills, because if they didn’t exist there’d be a load more trash everywhere than we’d seen. Or maybe I was just justifying my sugar craving.

* George Everest’s last name was pronounced with a long-E like Eev – Rest. And he never saw the mountain they named after him. Tibetans and Sherpas called it Chomolungma. Nepal named it Sagarmartha, for political reasons.  Reference: Touching my Father’s Soul