This stretch is practically a commute, with lots of other cars on the highway. Or mules. Really, by the time you are through with this section, you want to punch some mule faces. 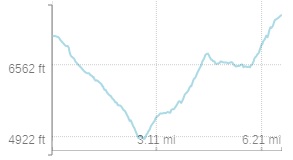 I doubled up on the oats the morning in Nunthala, stomach not really sitting well. I brought some Quacker instant oats for this purpose, but got charged a 30 rupee fee for the hot water. Lame. I probably could have argued that one away since I did purchase porridge and coffee as well, the fee is usually an attempt to charge people who bring ALL their own food.

The Kiwi stopped in for breakfast and wasn’t too happy about the group of trekkers who stayed up all night. There are definitely two types of trekkers, the ones here for a quiet getaway, and the ones here simply to party in a different part of the world. I sympathized.

While I was doing my morning ritual of filling my 1 liter Nalgene water bottle and hitting it with the steripen once, she made the comment to me that she doesn’t bother with the water filtering. “They know what water to drink.” I could see her point for sure and wondered if the filter was overdoing it, but then I didn’t see any point of risking it. A stomach malaise would do a lot to ruin the trip. [ see Gear List ]

Washed my sweaty moisture wicking short sleeves, and hung them off my backpack for the morning trek. Those were a savior for this hot and humid stretch.

We lounged around for a bit watching the hungover group slowly trickle out of their rooms. Man, come all this way to do the same shit you do at home?

After we got underway, it was more of the same shit, literally. By far, the worst part of the journey, it was nothing but tip-toeing around shit, breathing in shit, and looking at shit. I rarely looked anywhere but my feet for fear of stepping in more shit.

The donkey shit highway descended to the Dudi Kosi, a river running out of the Kumbu and we crossed the longest suspension bridge to date, after waiting for a dozen jackasses of course. Climbing up, we got a reprieve from the highway when we arrived at the pleasant village of Kharikola.

If I had it to do over again, I definitely would have pushed for a night in Kharikola. The lodges seemed newer, the town was cleaner, the view was better and there were monasteries to explore. 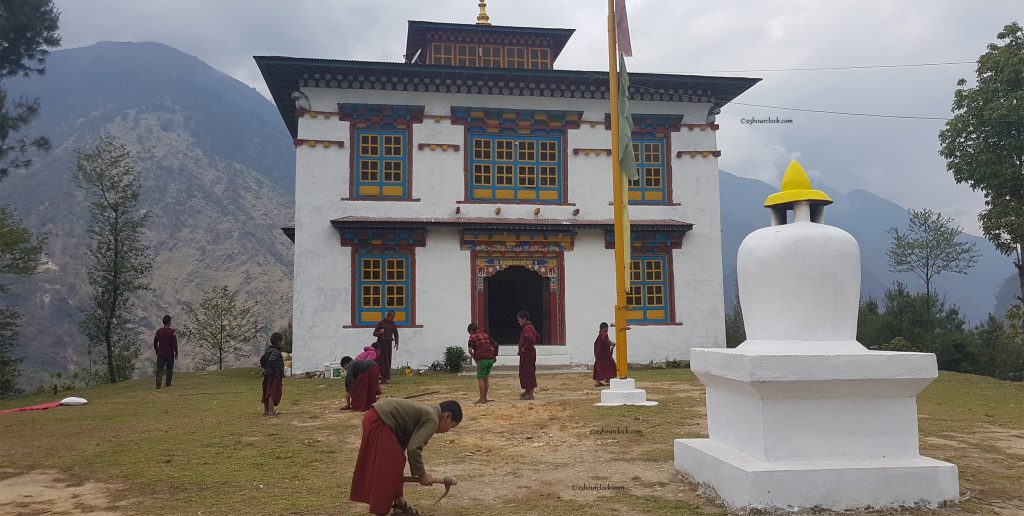 We stopped quickly into one monastery after racing each other up a long set of steps. I think churches in America should do this… build the churches up a couple hundred steps, get people to work their body as well as their spirits on Sundays. Strike that, then maybe there’d be more people fit enough to come to Nepal.

At the lodge we stopped at, I ordered a Fanta and was asked if I wanted a cold one. Uh, does a Yeti shit in the mountains?

I was fascinated at the refrigerator in the lodge, and outside of Namche, never saw another on the trek.

Speaking of Yetis, another trekker stopped into the lodge to enjoy lunch with us. He was a New Yorker named Miles rounding out a year of traveling the world with his backpack. It seemed he forgot to shave the whole trip. We conversed on the nuances of sleeping in a sleeping bag with a pound of hair on your chin. I offered him my razor.

Our company for most of the day

We finished out the day with a push up a mountain. We had set out before Miles, who caught up to us. Let’s race! I thought it was a good idea, he’d only been trekking for a year…

We arrived in Bupsa with plenty of light left and decided to call it a day. I looked around for a lodge with a western toilet as I was afraid I’d need it (didn’t). We stayed at the Yellowtop Lodge of which the proprietor was the wife of a climbing Sherpa who was busy on Everest at the time. I couldn’t help but sense a bit of tension in her. I guess I’d be tense too. 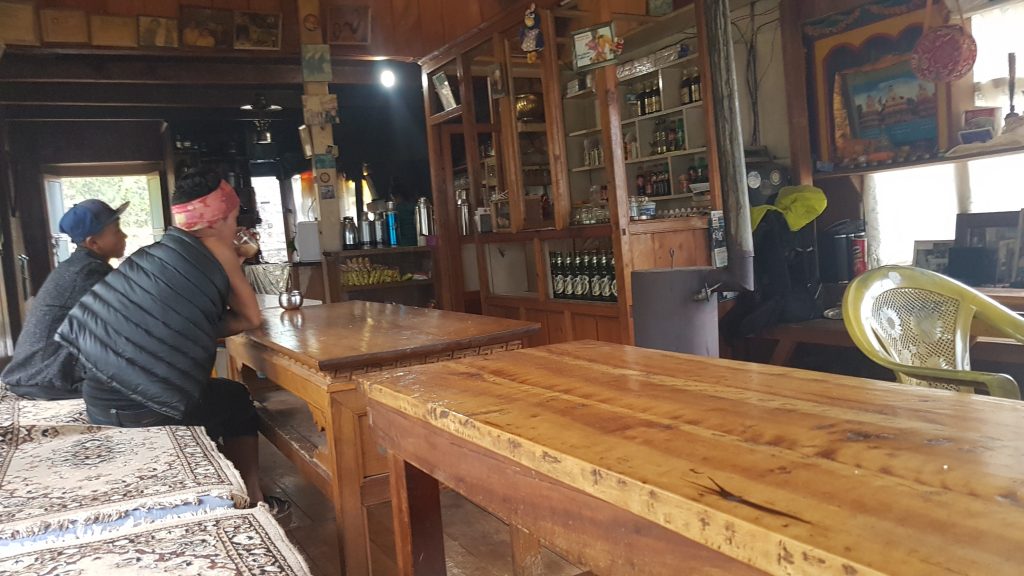 Dining room at the Yellowtop Lodge in Bupsa 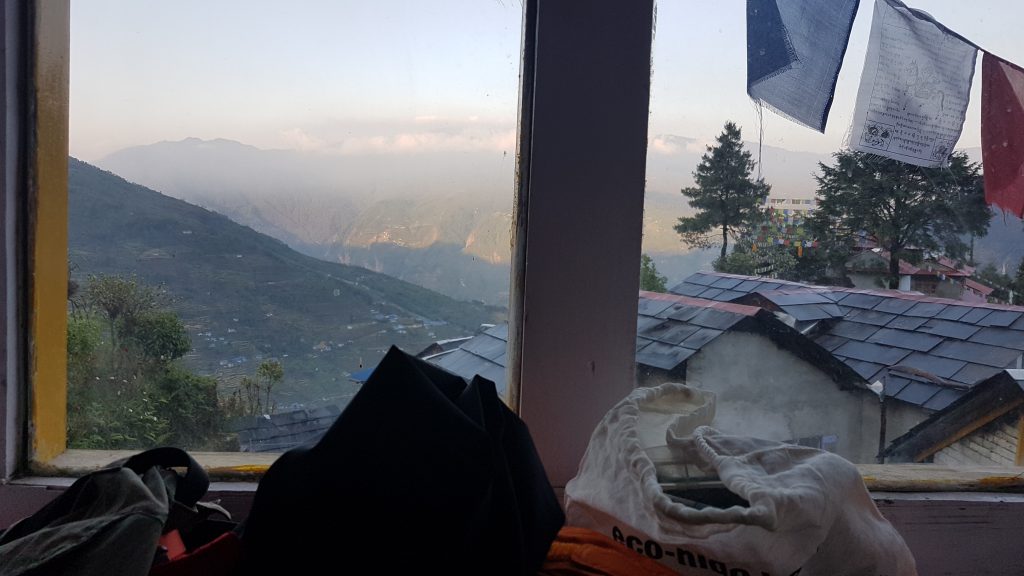 View from our room window in Bupsa 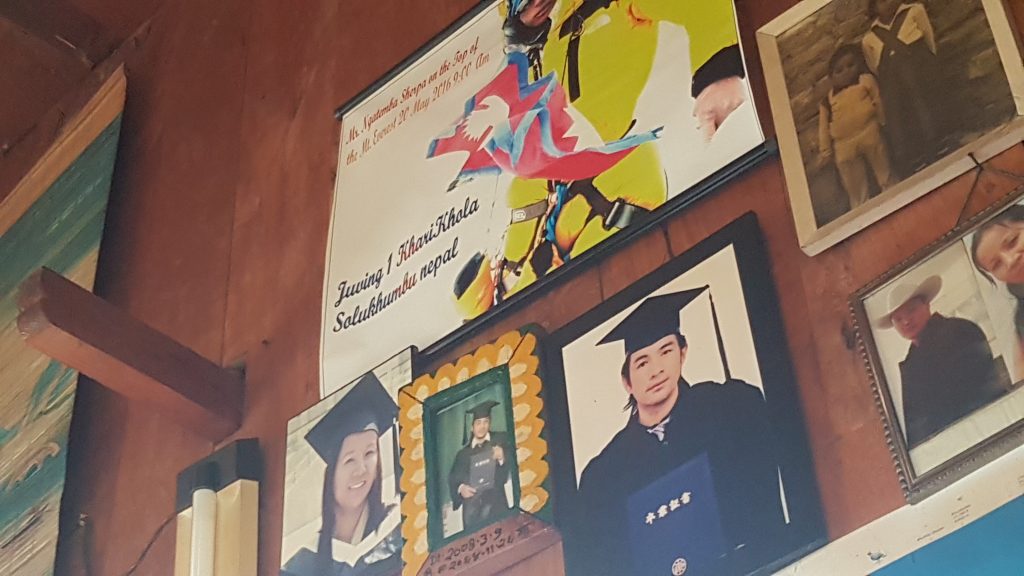 The wall of the Yellowtop Lodge in Bupsa with the owner standing on the summit of Everest.