It’s a two hour hike from Dingboche to Chukhung and the views and terrain will be similar to that of the trek into Dingboche. With plenty of time in the day left, it’s a good opportunity to tackle Chukhung Ri, a popular day hike and one of the highest points of the Three Passes trek, though still dwarfed by the massive Lotse face.

Chukhung is a location off the beaten track of the EBC trek and it becomes apparent with the company, being more climbers and more experienced trekkers. 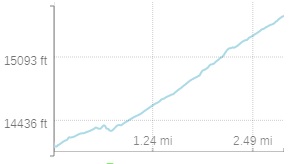 My trouble sleeping had me in the dining room early in the morning hanging out with Tahk. It was late before Bryon and the others showed up for breakfast. Porridge again for me, keeping it simple since it was certainly not a good time to switch things up.

It was a good stay at Tahk’s Hotel Umanga, a much better choice than the busy Bright Star lodge next door, I’m sure. We settled our reasonable bill of $30 and said our goodbyes after a relaxing breakfast. 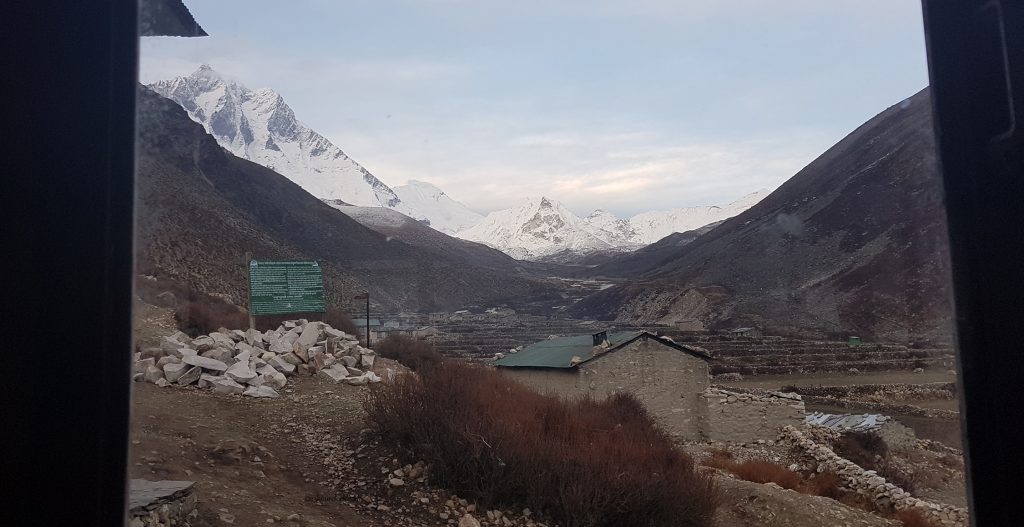 The inflow of moisture that seemed consistent in the afternoon came much earlier on our short hike up to Chukhung. We left Dingboche in clear skies and by the time we reached Chukhung only 2 hours later, we had to don our rain jackets amid a blizzard.

It was not the lonely trail that I’d expected either. There were loads of porters ferrying supplies to Chukhung, many for Island Peak basecamp, we were on the climbers’ trail now. For most of the trip, we were hiking through yak pastures made of stone walls which had become common after Tengboche.

Snow appeared from nowhere on the trek to Chukhung

We dismissed our normal strategy of checking all the lodges and stopped in at the first one. It was well built and had a nice dining room, though with plenty of company. I did my customary sweep of the toilets though, to find plenty of them to handle us all.

Some Dal Bhat for lunch and we watched for a break in the weather. 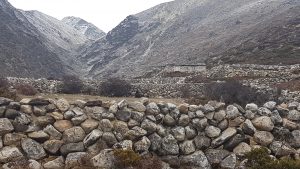 Yak pastures on the trek to Chukhung 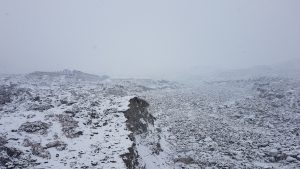 Chukhung in sight. Let’s just grab the first lodge on the left.

A Snowman on Chukhung Ri

The river of ice in the valley above Chukhung

A minor break in the weather came!

We started up Chukhung Ri in the early afternoon. The way was back through some old buildings in Chukhung and across a stream and then straight up. The going was slow for us, the altitude had taken hold and we were not the supermen we were below Namche, though we both were feeling good besides huffing and puffing.

The clouds blanketed the top of Chukhung Ri so we stopped where visibility became poor and trekked to a cliff to look out over the glacier. Being our first valley glacier (or maybe rock glacier, I’ll let you google the definition to decide), it was a wonderous sight, and we picked a good time. As the clouds rolled by, the sun would poke through and strike the glacier intermittently causing it to crack and the noise would echo through the valley. We sat in awe at mother nature for a good half-hour.

On our way down, it was snowman time. I wonder how long our new friend stood in the shadow of Ana Dablam. 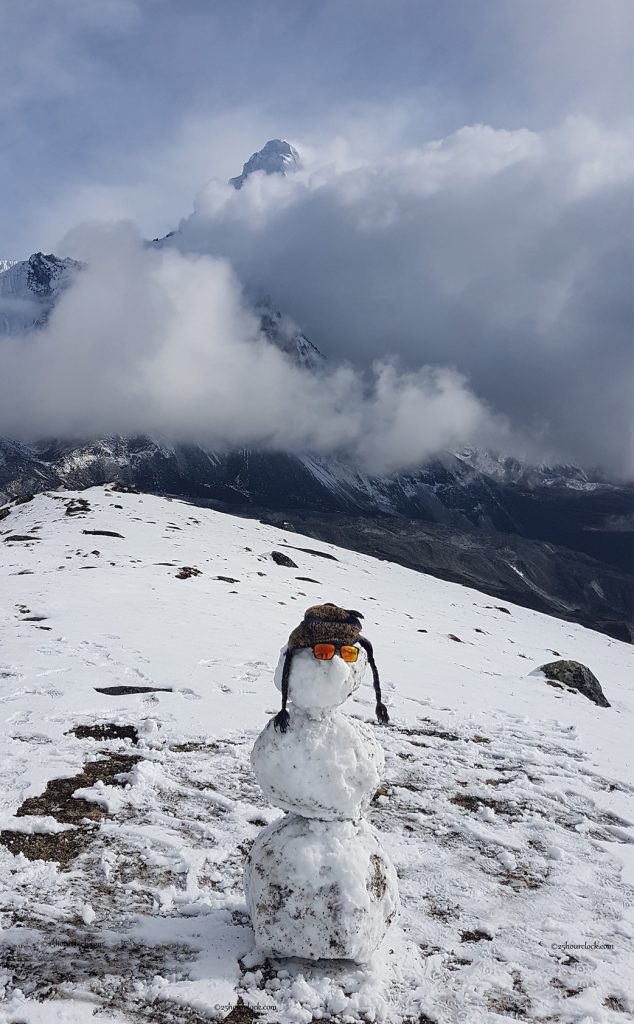 Snowman on Chukhung Ri with Ama Dablam in background 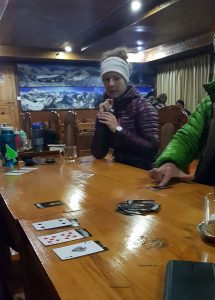 Back at the lodge, for the first time on the trek, I busted out my fleece to wear. It was going to be a cold night despite the yak stove, and I didn’t want to wear my grungy trekking jacket. The lodge we stayed in Chukhung, the first on the left, had a large dining room where the stove was lit only for dinner, and a small sun room where they kept the stove burning through the day. It was busy in the lodge, with Island Peak climbing groups going over their gear, and other trekking groups waiting for a break in the weather to tackle the Kongma La, the first of the Three Passes.

We sat down next to a group of travelers who had met up in Chukhung. The group consisted of Americans, Dan and Haley, Canadians, Joanna (Jo) and Lauren, and a Brit, Gaz. We added our American humor to the conversation and found us all outwitted by the Brit.

Gaz was the oldest, in his early 30s while the others were all in their early twenties just out of college or on gap years. I suddenly felt old at the age of 39. And jealous. When I was their age, I was playing poker and getting drunk every night. I wish someone would have told me how much better the people were outside the casino.

Soon our bubbly conversation turned to a card game which drew in even more trekkers to our corner of the dining hall. So much for getting out of the casino.

An Isreali named Mose, who was a terrible card player, but the best loser I’ve ever seen, joined in, along with his Turkish friend. We were representing three continents and getting along swimmingly, every one of us enjoying our vacation of a lifetime. Though I felt like I lost money, playing for free and all.

That night, I again had trouble sleeping. Could have been the altitude, could have been the ginger tea we overdid during our little party. I guess the group would have done beer, but were afraid of the altitude effects from alcohol, which are probably overblown so long as you drink plenty of water with it. But don’t chance it on the first day above 15k.