Chukhung is a good place to take a break, especially if you haven’t taken an acclimation day since Namche. You are now almost 4,000 feet higher than Namche and the body needs to get used to the altitude.

Even if you are not experiencing a headache or loss of appetite, all but the fittest person will struggle to get enough oxygen to their muscles and a climb will be grueling if not impossible.

Besides, Chukhung is a great place to meet other like-minded people, as I discovered, and is beautiful in its own right with the majestic peak of Ama Dablam and the Lotse face flanking it on either side, not to mention the rivers of ice flowing down the valley.

Our room in Chukhung

After the worst night of sleep on the trip, when I finally caught a couple consecutive hours of sleep and woke around 7am, I knew something was wrong, and it wasn’t the insomnia. I was nauseous and dizzy. Altitude Sickness! We tested ourselves with the drive from Namche and I managed to find my limits. Bryon, on the other hand, was fine, not even lightheaded.

I dragged myself into the dining room, being careful with every step so as not to fall on my face. I hoped some coffee and water would help things. I also begrudgingly popped a Diamox, though if I had it to do over, I would have skipped it. The science seems to be out on Diamox and with it being a diuretic, side effects could be a problem. Besides, when treating something that naturally goes away in a short amount of time, it’s hard to determine the worth of a drug that also works in a short amount of time. It was the only one I took for the trip.

The water and coffee was going down ok with a bit of struggle, but when my order of fried eggs and Tibetan bread showed up, which I thought would be easier than Porridge, I nearly gagged. I knew that I couldn’t sit there and be miserable though, so I cut my breakfast up in small bites and started forcing it into my stomach.

By the time I got it down, it was cold, and our friends from the last night had started to trickle in. Maybe it was the diamox, maybe the food, maybe the caffeine, maybe the companionship, but I was feeling noticeably better and breathed a sigh of relief.

Snowed in in Chukhung 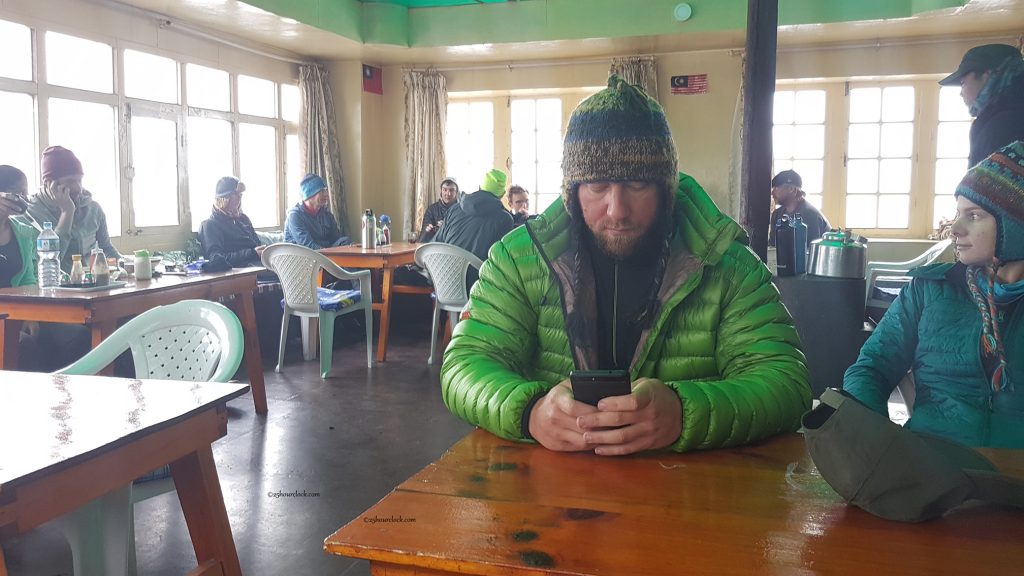 Sun room in the lodge at Chukhung

Our mates from the night before had planned to tackle the pass today but it looked to be the worst weather of the trip so far. We couldn’t see 100 feet from the lodge and the wind was whipping the clouds through the valley furiously. I was disheartened as we planned to use the whole day to get up Chukhung Ri and possibly Chukhung Tse, which would have been the high point of the trip and a bit into the “Death Zone” (above 18,500 feet). Although, my altitude sickness would have made that unlikely anyway. This would have been an argument for going the opposite direction on the Three Passes.

Our group spent the morning playing cards in the sun room of the lodge, and by the time I scarfed down lunch, I was feeling remarkably better. I got it in my head that it would be best to hike up higher than the lodge… you know, because if you have altitude sickness, the best decision is to go higher.

The group had no interest in braving the weather and tried to talk me out of my foolish idea, but my mind was set and shortly after lunch, I set out alone to tackle Chukhung Ri.

My exhausting climb up Chukhung Ri

If you’ve ever thought of trying to climb higher than you’ve ever climbed on the afternoon of a day you woke up with altitude sickness, I’d advice against it.

Though my headache and lightheadedness were gone, every breath was a struggle and my legs felt wobbly as climbed through the clouds alone on the side of Chukhung Ri. At least plenty of people knew were I was in case I had collapsed and not shown back up at the lodge.

After 500 meters or so, I relented, took some pics of myself in the clouds, rested and hoped for a glimpse of the Lotse Face through a break in the clouds, never got it, and finally scampered back toward the lodge.

I never again experienced the kind of nausea I woke up with that day, maybe my ill-advised climb helped a bit, if nothing else than to get my blood pumping instead of sitting around in the lodge going stir crazy, which I did the rest of the day. 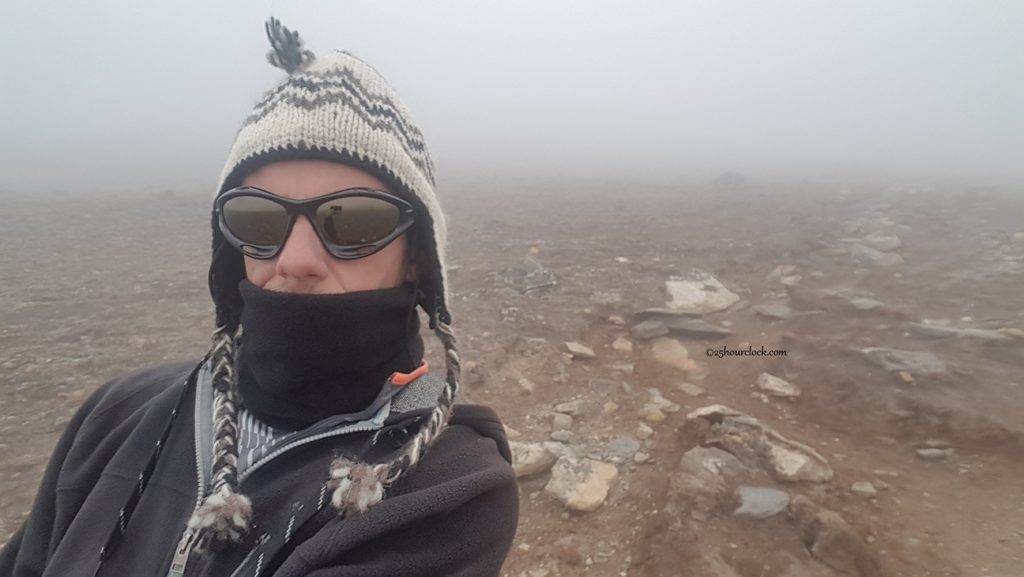 Climbing in a whiteout with a bit of altitude sickness. How do I look?

Talk of bathing, traveling, and peaks

The group of trekkers we happened across in Chukhung were an amazing group, the kind of people I’d hoped to meet, if perhaps too young for me. They were all seasoned outdoors enthusiasts with accomplishments such as the John Muir Trail and glacier crossings. In fact, my own claim to fame of summitting Mt Whitney in my 30s seemed to pale in comparison to all they’d accomplished. Better late than never, I assured myself.

Our conversation, as they are apt to do in the Khumbu, turned to topics such as bathing and how we managed to stay clean, with opinions ranging from “why bother” to “it’s even more important.”

I told them of Miles, the traveler we had met on the way to Namche, who did seem to surpass all of us in every aspect from a year long trek through countries on 3 continents to not bathing or shaving for the whole time. I wondered how Miles was doing. Probably in Everest Base Camp by now.

That night, I took some ibuprofen to take the edge off the aches, and 1mg of Melatonin which I brought for insomnia emergencies… and slept like a baby.