There are days that will live with you the rest of your life. If this is your first high mountain pass, this will be one of those days. The Kongma La out of Chukhung is more than a 3,000 foot climb topping out at over 18,000 feet.

Once Ama Dablam disappears behind the ridges that flank your route, it will be just you and the pass. Put your head down and get to it. 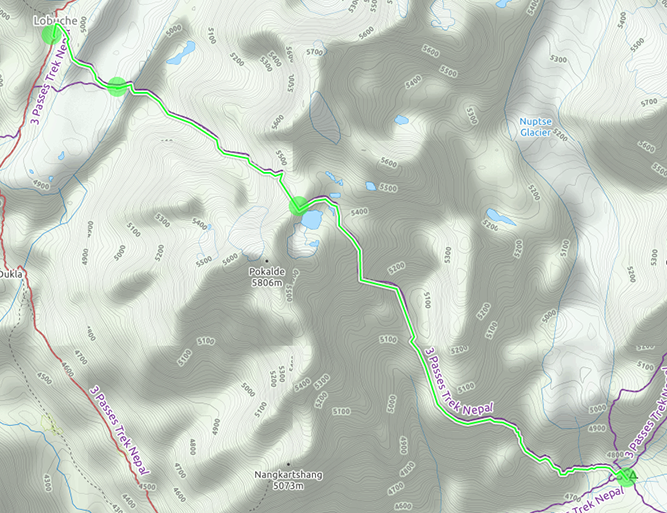 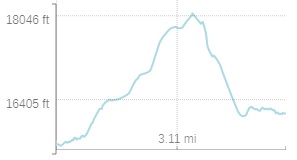 Trouble finds a kid in Chukhung

Early in the morning, I was awoken by banging on the door of the lodge and cries of help. I raised up in the frigid room attempting to get my bearings, and was relieved when I heard Nepali voices rushing down the hall. I collapsed back into my sleeping bag, I could do nothing but get in the way.

For the next 10 minutes, I heard some conversing in English, between the lodge owner and what sounded like a young kid, but couldn’t make out what was being said. When they had retreated to another part of the lodge, I finished my restful night’s sleep.

When I awoke for the day and made my way to the dining hall before 6am, I walked past a room with the lodge manager, an older Nepali lady, sitting over a young Western kid in a bed with towels draped over his head and a vomit pale on the floor. She stood up and asked if I was ready for breakfast. I was, of course, but I felt bad for interrupting her. I had not meant to, the room was simply on the way to the dining hall. Nonetheless, she walked with me to the dining hall to unlock the door and a short time later, some of her help appeared to get breakfast going.

Chukhung lodge manager, and in my book, hero.

I felt a tremendous amount of respect for her, and it was my first time witnessing the multiple duties the lodge owners accept operating in the Khumbu. Not only did she have to manage the affairs of a lodge full of trekkers ready to get going on that clear day, but she had to wake up early to attend to a climber or trekker who may have had an accident or got in over their head.

Our stay in Chukhung had cost a little over $100usd, well worth it.

A lodge of trekkers ready to tackle a pass on a clear morning in Chukhung.

Trekking up the Kongma La

The trail to the Kongma La provides one of the finest views of Ama Dablam.

Bryon and I were the first out of the lodge in the morning with the rest of our group heading out before we were out of line of sight. Did I mention it was a clear day? I never had a more spectacular view of Ama Dablam than that morning as we trudged upwards toward the first of our Three Passes. Though still panting more than I normally would on such a slope, I felt 100% healthy and was ready for whatever the day would bring… I would need it all.

Shortly out of the lodge, we were overtaken by a group of Kiwis and their Nepali guide. So much for slow and steady, I wondered if they could keep up that pace. Besides them, we were alone on the mountain, trekking through rocky ridges and past half frozen lakes, a glorious day in the mountains. 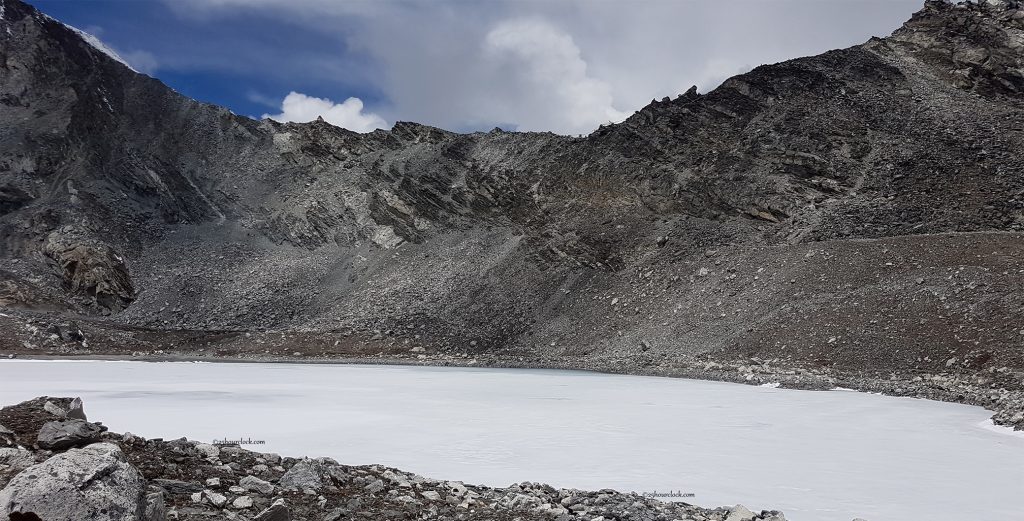 When the Kongma La comes into view. Notice the clouds beginning to build on the other side.

When we caught sight of the pass, a low dip in a rigid ridge running between two rocky peaks, we noticed the tail of the Kiwis arriving and one figure slowly grinding higher up the last portion of the steep trail, and behind us the train of our mates from Chukhung pressed on. Not only was everyone going to be on the pass together, but we were going to have another visitor in the form of weather, as clouds were sweeping into the valley on the opposite side and beginning to spill over the mountains.

Miles on the Kongma La

We gained on the lone figure struggling up the pass until we both arrived and discovered it was none other than Miles from Namche! He had drunk some unfiltered water in a lodge near Dingboche and had been struggling with a stomach ailment. I became thankful for the Steripen I’d been hitting all the water with on the trek. How about a rematch, Miles?

A short time later, our mates finished their ascent and we congratulated each other in our first pass. 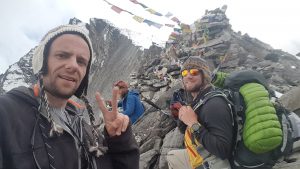 Bryon, Miles, and myself on the Kongma La

Looking back on the approach as Gaz makes the pass.

Descent to the Khumbu Glacier

The conditions on our glacier crossing and notice one peculiar character.

Having a bit of a headache, I left before our group with Miles who was also ready to get lower. The descent off the pass was even steeper and rockier which with the newly falling snow caused it to be a little slippery. On an even more icy day, it would have been treacherous work. In the distance, I could make out the grey river of ice I knew to be the Khumbu Glacier that flows from the Khumbu Icefall near Everest Base Camp. We were nearing our date with the highest mountain in the world. Before then, we had to deal with that glacier.

Even with our quick descent, the weather had turned miserable by the time we reached the boundary of the glacier, lowering our visibility and covering the rocks with a layer of snow. After ascending the short but steep loose rock moraine, we looked out over a world I’d never seen before – a river of ice covered with boulders and dirt, with mounds as high as a five story building and broken crevasses where melted snow formed small pools. Though it looked rugged, I wasn’t particularly worried, might even be fun.

Then we saw the Kiwis and their guide bounding over one of the rocky ridges from the north. They stopped momentarily to inform us the path was icy and we needed to go a different way. I was skeptical. Was it icy, as in a little slippery? Or icy, as in impassable? It seemed from what we could see and that I could make out with my gps, that Lobuche was just a short distance across the glacier from our current location. But, who was I to argue with a Nepali guide on a glacier I’d never been to before?

Jo and Bryon negotiating a path through the rocky glacier.

After the rest of the group trickled up the moraine, we set off south in pursuit of the Kiwis and their guide. It was obvious we weren’t on any sort of regular path, as we were scrambling up and down mounds of boulders. I was at home, having spent years climbing in the Red Rocks of Nevada, but some in the group were struggling with the new form of travel.

Haley checking the state of the boulders.

In hindsight, arguing with guides, is generally a good idea, as they are human and have different motives. Some may be taking as safe a route as they can, while others may simply be trying to prove useful by making things up. Maybe the Kiwis’ guide had a genuine reason for going off the normal path, I’ll never know. Not even our guide, why we went hurdling rocks on the Khumbu Glacier is lost on me.

Probably the strangest character I met on the trip appeared during the early part of this traverse. He was of Indian origin, wearing a heavy black trench coat which looked made of corduroy, with a small red college book bag style backpack slung across his back, and his skinny legs were covered in a tight black cotton fabric. A little heavy-set with a Fu Manchu mustache, and he was holding a large red umbrella.

He approached me, after he had approached the Kiwis and asked politely, “Lobuche?”

I answered, “Yes, I’m going to Lobuche.” Which seemed to satisfy him, and he joined in the line.

After 30 minutes of scrambling, the effort was getting to me a little, and moans of impatience and suspicions about our route began to creep up in the group. And…

“I think so…” It was apparent he didn’t speak much English and perhaps as nervous as I was becoming about our destination.

Another 30 minutes, and it seemed we found the path the guide was looking for. It was a smooth ridge of dirt that kept the river of water flowing through the middle of the glacier dammed up in a large lake. We easily crossed the dam.

On the other side, the path led to the south but Lobuche was still to the north, and so the guide led us up the biggest mound of boulders yet. And I mean boulders. It was the most serious scramble of the trip.

“Everyone is fucking going to Lobuche!” I heard Bryon yelling at the Indian, as we were making our way up the field of rocks.

What seemed like an eternity of scrambling over boulders, we finally descended the moraine on the other side to see Lobuche in the distance. After looking around a few of the lodges, we settled into the New Guesthouse to EBC due to its nice glass windows.

In all the guesthouses, the toilet situation seemed to take a big step down, as we were expecting in the highest stages of the trek. It’s hard to handle sewage in this part of the world. I was ultra careful with all my water, as well as what I touched with unclean hands. Hand sanitizer would have been nice, but at least I had soap, which I made extra use of.

That night, we had horrible dreams…

“New” guesthouse to EBC. Picture taken the next morning.

“Oh, that glacier isn’t hard. The next one, on the way to Gokyo is much tougher to cross.”

Those were the words of Joao Garcia, the elite climber who I had met on the stroll into Pangboche a few days previously, and who honored me with his company in the dining hall of the EBC Guesthouse. The lodge manager eyed me suspiciously wondering if I was someone important as well. No ma’am, I’m nobody.

That settled it for me that we had taken an unnecessarily taxing route through the glacier. I may not be experienced on Himalayan glaciers, but I know terrain, and any “harder” than what we just crossed would be climbing, not trekking, if you could even call what he had done trekking.

“Yea, you have to be careful with some of these guides,” he continued, after I relayed the story.

He was in the area looking for a different route up Lobuche mountain, and I heard his story of summitting Annapurna, the deadliest of the 14 highest peaks, in a glorious alpine style ascent that exposed him to the mountain the briefest time possible. I asked him about other expeditions that would camp out high up waiting for weather.

“No way, you are just asking to be buried in an avalanche.”

Why I didn’t get a picture with him is beyond me. I guess pulling out a camera on someone just to prove I met him isn’t in my nature. 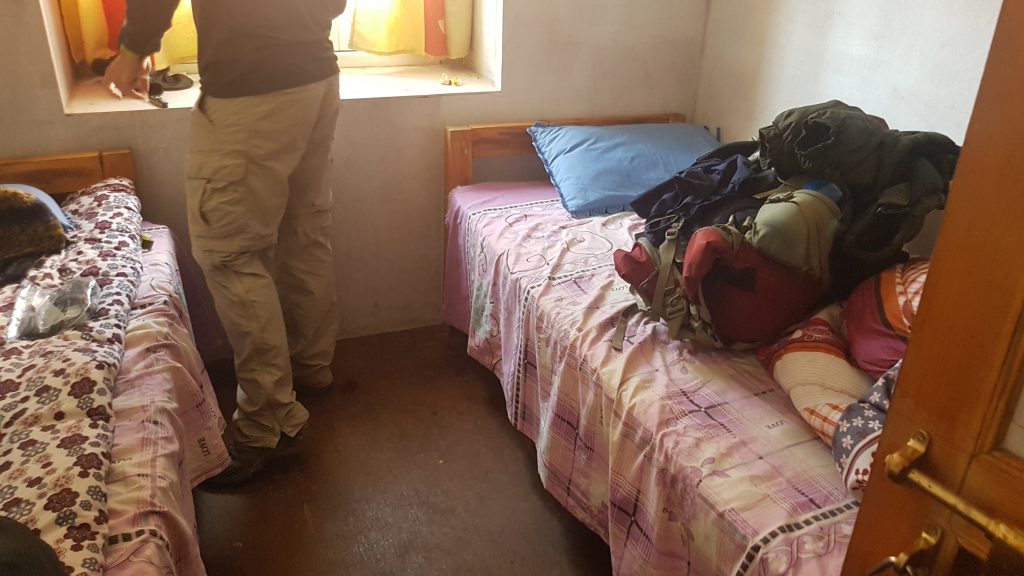