This is the day! A suggested itinerary from Lobuche is a hike to Gorek Shep and then approach Everest Base Camp in the afternoon. It can be a leisurely day depending how far into EBC you wish to go. If the weather is good and you feel fit, you can make a hike up Kala Patthar the same day. 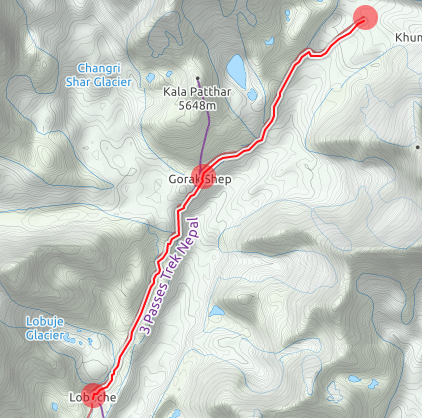 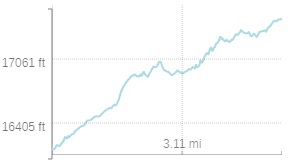 On to Gorek Shep 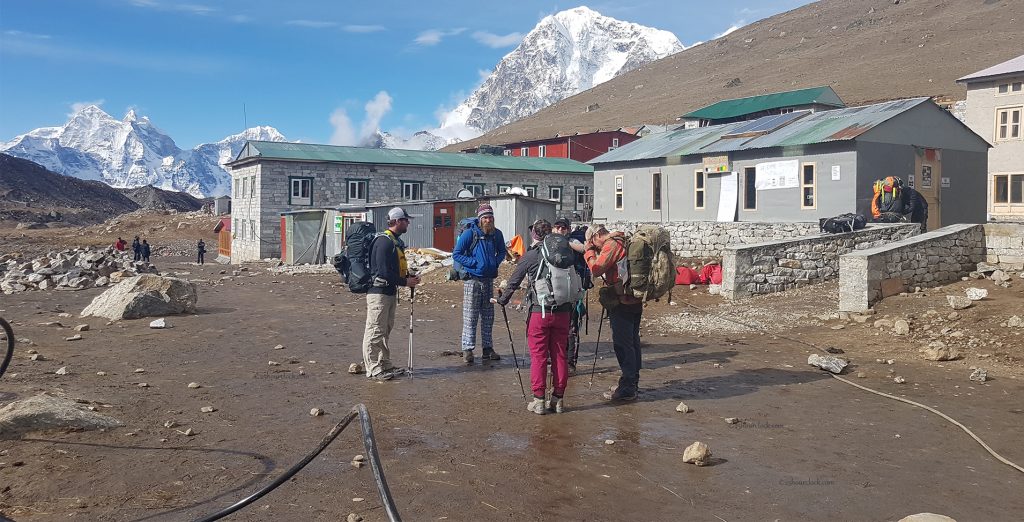 “Gorek Shep has a water problem. I try to avoid staying there when possible, you can make the hike to EBC from Lobuche.”

Garcia’s words resonated in my head as we traipsed toward Gorek Shep. I decided it would be mostly bottled water and packaged foods for me. This was the main event and I was not going to let some foul water screw it up for me.

On that note, don’t let plastic Nazis dissuade you from purchasing the bottled water they sell at Gorek Shep. It’s far more beneficial for you to use than the millions used and thrown away everyday in supermarkets and gas stations throughout the world. A porter brings them up, and gets paid for it. A porter brings them down, and gets paid for it. You’ll occasionally see the rubbish porters and yaks. Like everywhere in the world, the Khumbu has a landfill, segregated from the population, with no drainage. Only if you throw the bottle on the side of the trail does it hurt any more than anywhere else in the world.

Pumori in the distance as our group and the supply train makes its way to Everest Base Camp. 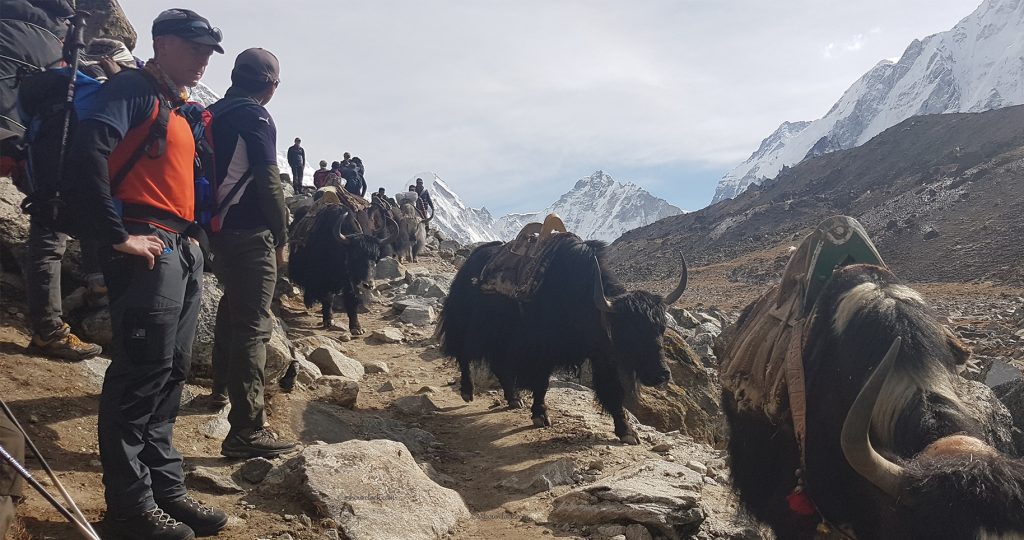 One of multitudes of yak caravans to Everest Base Camp

It was a slow and impatient grind to Gorek Shep side stepping yaks and multitudes of hikers. I learned that yaks generally won’t run into humans. You can test this by standing on the trail playing with your phone as a yak train approaches. 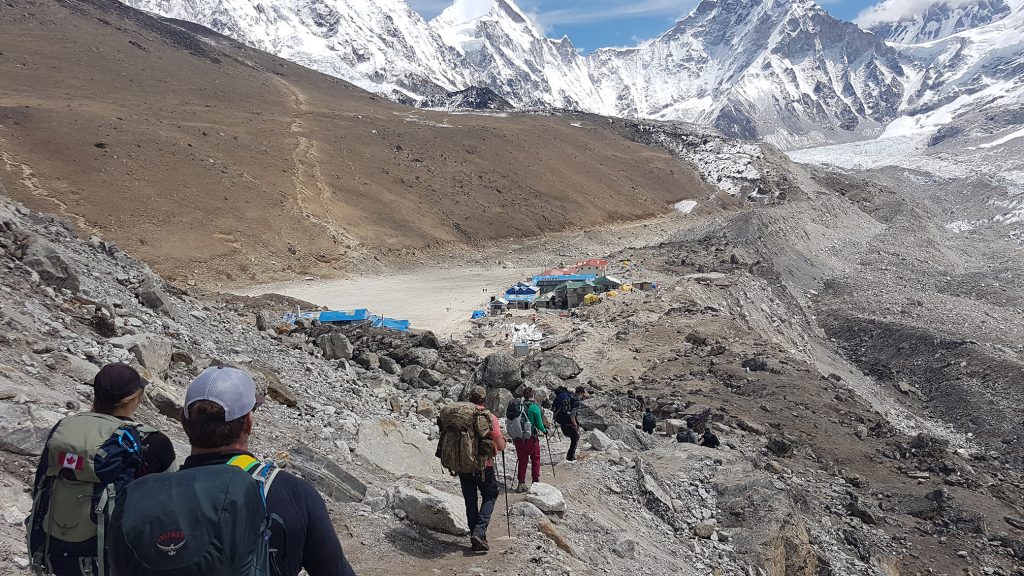 Once we arrived, I relayed Garcia’s recommendation of the first lodge on the left, “They are all shit, but that’s where I stay.” The lodge seemed ok, even if my mind was painting every surface and utensil as covered with germs. The group sat down for lunch, despite my insistence we keep going on snack food. 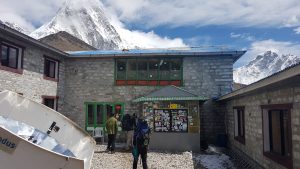 First lodge on the left at Gorek Shep

Alone and on to Everest Base Camp

I’d dreamed of this moment, and I didn’t want to waste a minute of it eating bacterial laden food in Gorek Shep. I cruised on to EBC. I had my own plans anyway, which would have been more difficult with a group of 8.

I passed a large mound of prayer flags which signaled the end of the line for most trekkers, and a horse carrying a tourist… odd. 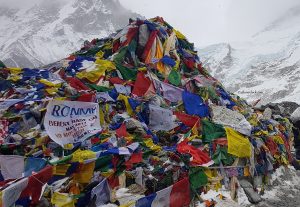 I tried to stay on the widest trail, the one leading to the right of all the tents. Got a good view of the back of the toilet tents… oh the poor porters who carry that barrel out. 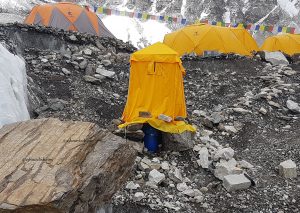 I found some red flags that seemed to denote the route through the ice fall. I climbed up a little but thought better of it.

It took a half-hour hiking through the tent city, the largest of any year before and at a time many of the climbers were making their final push, before reaching the other side where I climbed up a mound of rocks and looked out over my accomplishment. 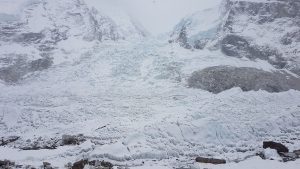 Khumbu Icefall from the end of EBC

I passed by climbers of all ages and ethnicities, most of whom ignored me and some who scowled at me. Their Nepali guides though, were always helpful in making sure I found whatever I was looking for and quickly explaining the events on the route. Another season, another death, and apparently, the Hillary Step was no more, destroyed in the previous year’s earthquake. As I stood there, a helicopter’s engine squealed up the icefall to pick up a stricken climber. 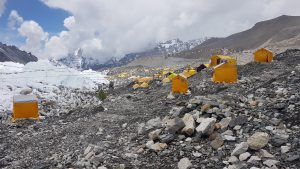 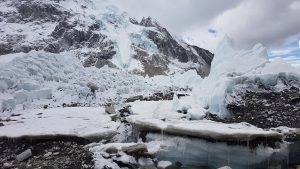 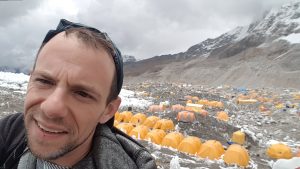 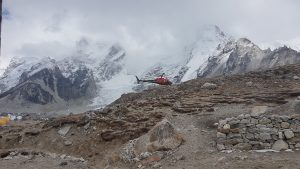 Finally, I had enough and returned to meet the group at the first mound of prayer flags. Weather had rolled in as usual by this time in the afternoon and we retired to Gorek Shep.

View of Everest Base Camp from the helicopter pad.

Dining Hall at Gorek Shep. Notice the empty condiment bottles… I’d pass if I were you.

I suppose there was no getting around it, I’d have to eat a meal in Gorek Shep, but I was still careful that anything that went into my body was either well cooked or bottled. There was no ginger tea for me that night.

I spent a good deal of time shivering in the dining room that night, probably from over exertion on my trip through EBC, but I fought my desire to take a nap as I would need a good night’s sleep.

I filled up on potatoes and cheese, as we planned to tackle Kala Patthar before sunrise the next day, and until our early bedtime, we bonded over cards amid a packed Gorek Shep dining hall.