Day 3 should be the day over Lamjura Pass and first time above 10,000 feet. This is the spotlight day for the section from Jiri to Lukla and makes the whole extra section worth it. 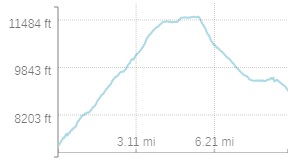 A morning of up’s

We woke up at 5am as the sun started shining through the skylight in our room. Yes, a skylight. No really, imagine a skylight in a long wide shaft for the sun to beam straight through…

I could hear the family stirring downstairs and I unzipped my sleeping bag and checked for network access… just a habit, there wasn’t any. As 6:30am rolled around, I was called on by the 13-year-old girl-in-charge who had just finished breakfast. It was a brothy stew egg noodle mixture. It was ok. I drank more salty tea for the trek up to Lamjura Pass, just to prove to Bryan I could do it. 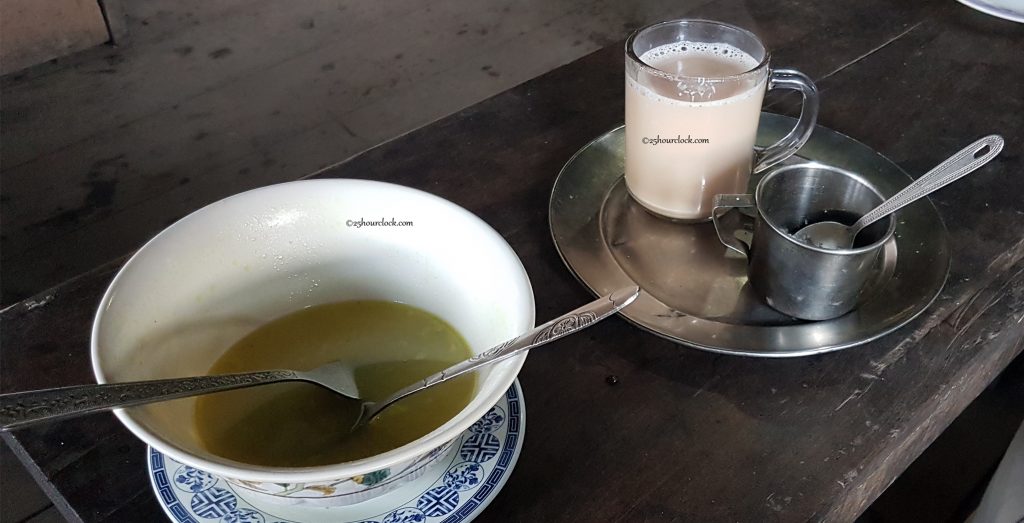 We were on our way at around 7am, initially expecting another bright sunny day, but quickly some ominous clouds began forming on the ridges around us and we realized we’d be hiking in the rain shortly. We donned our rain gear for the first time around Sete. [See Jiri-EBC gear list]

Sky darkening up by the time we reached Sete

Past Sete, we reached a collection of lodges and homes nearing 11am. We’d climbed about 2,500 feet already and were ready for lunch and some reprieve from the rain. An old man stepped out of one of the huts and smiled at us and we thought it was as good as any.

My first order: coffee. I had missed out on it in Chimbu and the old man’s coffee was superb! He had a strange way of preparing it with a system of strainers. That sweetened black coffee sure hit the spot. We ordered what we thought would be a quick meal: chicken fried rice. We both ordered the same to help speed it up as we wanted to get over the pass as quickly as possible. We waited, and waited, and checked on him, and waited more. Was he cooking it in a crock pot?

A nice old man preparing our lunch on the climb to Lamjura Pass. Nice… but not a swift cook.

By far, the slowest rice meal I’ve ever had in Asia. We must have sat around in that man’s lodge for 2 hours. Maybe we should have asked for Dal Bhat and spent the night with him.

Soon after leaving the old man’s lodge, we began walking through some of the most beautiful trees I’d ever seen. They were covered in flowers and very bushy. Even through the gloomy day, they seemed bright and cheery.

Then we had an odd encounter. I looked back to notice a 40-year-old Nepalese woman holding an umbrella walking with us. I said Namaste and stepped aside to let her by but she motioned that she was fine where she was. And the three of us kept trudging up the mountain not saying a whole lot. I eventually got her name as Pussan… another Pussan. I assumed she was either looking out for us or didn’t want to go over the pass alone. She certainly wasn’t with us for the conversation.

Part of our entourage ascending to Lamjura Pass

As the rain turned to sleet, our entourage grew in the form of dogs. They weren’t really begging, they were just walking. Hey, everyone is going up to Lamjura Pass in the rain, we better go too!

Even he was impressed with the view!

In what seemed a miracle of our journey, the weather just blew itself out as we reached the pass and left us with a view of the snow covered mountains flanking the pass. Rafe came marching up the pass around that time, so we stopped for some selfies before careening down the muddy backside of the pass. 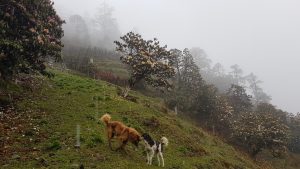 Dogs playing in the snow going over Lamjura Pass 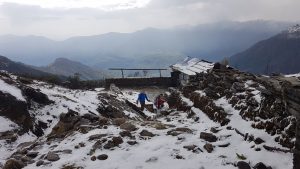 Rafe and the Nepali lady on Lamjura Pass 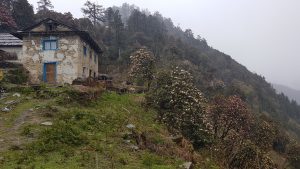 The scenery of Lamjura Pass was some of the most beautiful 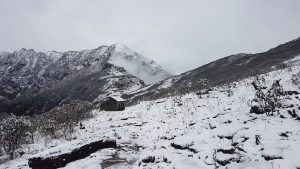 The weather broke just in time for us on Lamjura Pass.

And careening we did… I had a private conversation on who could have the cleanest shoes when we reached the bottom. Pussan won.

The short bushy flowery trees quickly gave way to mammoth trunks and a high canopy. We must have passed through a half-dozen different eco-systems that day. 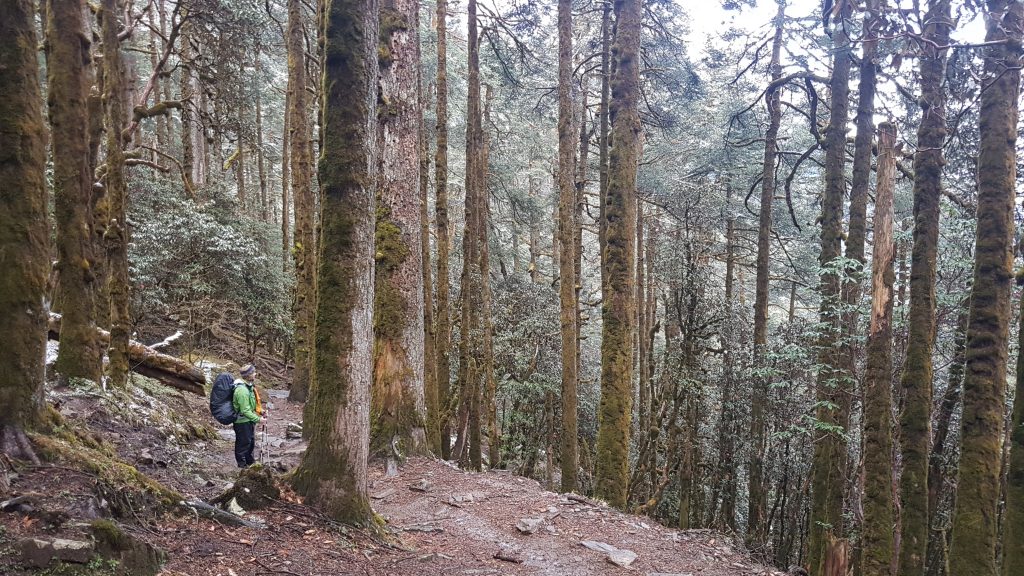 The thick forest on the opposite side.

We stopped at a lodge halfway down and met some trekkers on the Great Himalayan Trail who were over 40 days into their journey. Um, Nah, in fact, can I go home NOW?

We trekked on through beautiful countryside until finally reaching the outskirts of Junbesi which awarded us in a beautiful view down a green valley with the snowy cap of Mt Numbur sitting at the end. We passed a monastery and then were greeted by Dane and Ally at the first lodge coming into town, House Namaste. It seemed nice and we stopped.

View down the valley toward Junbesi with Mt Numbur sitting at the end.

It was indeed a nice lodge, with hot water showers and western toilets and a large clean dining room. I spoke with the lodge owner Premod for most of the evening about the joys of managing a lodge built for trekkers. God Bless him. Or Buddha. 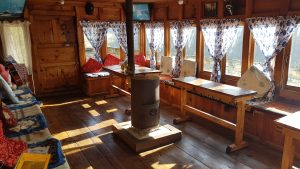 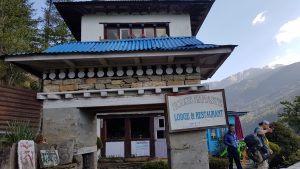