The goal for the day out of Deurali Pass should be to get as high up Lamjura Pass as you can. There are multiple stopping points on Lamjura Pass so you can literally climb until you drop. It’s actually quite a ways to the first lodge once you cross the pass and weather will be finer in the morning so stopping in Sete or the next section of lodges would be a good target.

Otherwise, prepare for a long day of trekking and lots of company from local Nepalis of all ages.

From Deurali Pass to Chimbu – Day 2 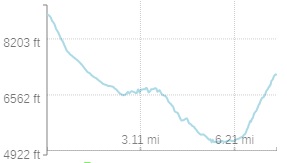 Morning at Deurali Pass. What’s the deal with the rock walls? beats me.

I was up at 5am in the Highland Sherpa lodge and by far the first one up. We were told the previous night that breakfast was at 7am, no ifs ands or buts. I sat in the dining room playing with my phone which I had full reception on, I guess those guys did good work. I’ll exist on the modern luxuries as long as possible.

For breakfast, I ordered Porridge and Chipatti bread. I planned on piling on the fiber in the morning, to help stave off any bowel issues while on the trek. A pot of coffee for the both of us and we were fidgeting to get moving.

The bill came to $34 for the both of us, and we said goodbye to the charming Pussan and headed down from the pass.

As interaction with local Nepalis go, this was one of my favorite sections of the whole trek. We learned a lot in this section.

The first one was to bring pens. All the kids would run up and ask for pens, though I assumed it was a euphemism for money… eventually one bold girl got there. “Pens?” no, sorry “chocolate?” no, sorry “money?” hahaha, well ok here you go. I just had to. She was a great salesman.

When the trail passed through one man’s front porch, he asked for 100 rupees. Sorry man, you are not as cute as she was.

All in all, we were making quite the impression on the locals.

But it was the wood carrying girls that I was most impressed with. We followed the trail down to a little stream when we came across a couple young girls, I’d guess 10-12, with a basket strapped to their backs full of wood. It appeared to be drift wood that had been carried down by the stream.

They were wearing pink pajamas and one had on red lipstick. She was a cute girl, she was probably showing off for the local boys. When we passed, she stopped and smiled and we made jokes with her about how much each of our backpacks were… she won the weight contest handedly, never dropping her bright smile.

At the low point of the valley, we trekked across a small section of road where full-on construction was in progress. In Nepal, they don’t make detours, we simply hiked through all the bulldozers trading waves and Namaste’s with all the workers. It’s unfortunate though that the classic trek from Jiri will soon have sections paved over.

Nepalis going about the daily grind.

Arriving in Kinja just before the climb to the Lamjura Pass began, we sat down to have a late lunch where we met a solo denim-jean-wearing Swiss man named Rafe. He was only the second trekker we had met. The restaurant told us not to order the Dal Bhat as it would take too long, so we ordered Potatoes, which took about 45 minutes. Holy hell, how long would the Dal Bhat have taken, 3 hours?

Rafe was long gone by the time we had our fill of potatoes and strapped on our packs. It was already 2:30, and though I wanted to just relax in Kinja and tackle the pass the next morning, we pressed on.

Final descent into Kinja. Generally the countryside of the trek from Deurali Pass

Waiting for lunch in Kinja. For the 45 minute Po-Ta-Toes.

The hike up to the pass was slow going and it seemed we wouldn’t make the normal stopping point of Sete until around 5pm. 5pm is really too late to find a lodge, eat, and get settled and ready for an early start. Plus, it’s an adventure not an endurance contest. 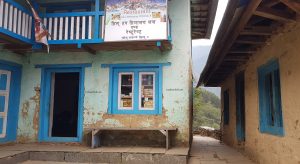 Chimbu lodge – probably the most basic we stayed in during the trip but also one of my favorite nights.

I saw on my gps that a lodge was marked about halfway to Sete and when we reached it, it seemed deserted. Though after searching around the back, I found a 14 year old boy named Nima that showed us the rooms and rounded up his younger sister. It seemed the sister was in charge of the lodge, as she barked orders to her brother and her father who eventually showed up. Please don’t yell at me. 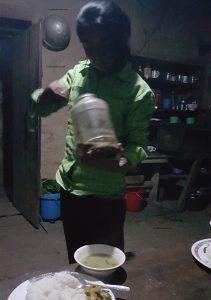 The 13-year-old girl in charge of affairs at the Chimbu guesthouse. And when I say “in charge,” I’m not kidding!

We enjoyed our dinner prepared by the young girl in a smoky kitchen separate from the main lodge. The lodge was very basic, but I found it quite comfortable considering the room was big and the proprietors were friendly. It seemed our presence there was more important to them than at any of the lodges we stayed at so far. I also tried some of the infamous Nepali salt tea… not so bad, just add sugar, lots of it. No really, lots of sugar.

That night was a pleasant sleep despite the hour long thunderstorm in the middle of the night. I’d never heard that kind of thunder. It echoed up the Himalayan valley for a good 60 seconds with each clap.

Room at the guesthouse in Chimbu.