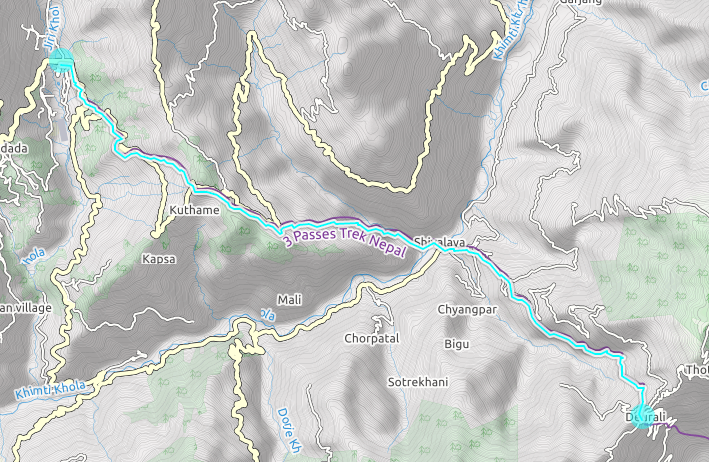 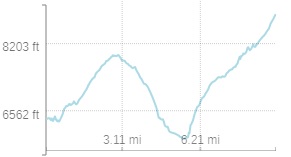 Profile of Day 1 from Jiri

Day 1 out of Jiri is all about testing your soul

The first night of the trek and I’m glad I brought my ear plugs. There was a chorus of yappy dogs just outside the lodge and when I put my plugs in, I swear they thought, “Good, a challenge.” I still managed a restful night’s sleep due to jetlag and was up by 5am, the first of the lodge. 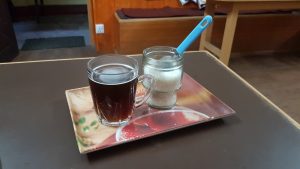 We had breakfast and said goodbye to Norgen, who ran the lodge, and we were on the trail. I’d installed Gaia Gps on my phone so we knew where to go, but it would not have been needed as the trail was well marked and there was always someone around to ask directions from.

From Jiri, it went up, there was no warmup period, no graceful incline, it seemed they put the first mountain there to test your resolve. Are you totally sure you want to do this insanity for 3 weeks? 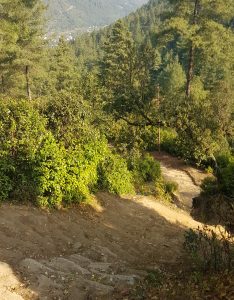 The straight up climb out of Jiri

We learned quickly to walk counter-clockwise around prayer flags, as an old lady had them in front of her house, I believe more so to keep trekkers from walking through her porch. Too bad it was too early in the trek for us to have been educated. Next time, don’t build your house on the trail.

Walking straight through yards on the hike out of Jiri is common. Rarely were we short of someone to say Namaste!

And Namaste! It’s required to say Namaste to everyone you meet. Really, possibly a law. I wouldn’t want to end up in Khumbu trekkers’ jail on my first day. I quickly dropped my American Hey for Namaste. I liked saying it, it seemed like saying “Good tidings” and brought a smile to my face every time.

Passing counter-clockwise not always this easy.

There weren’t a lot of trekkers out. We met one American couple named Dane and Ally who had been traveling in India for several months.

I’d later discover that most trekkers would begin at Salleri. It was closer to EBC and the same price for a bus. Nowadays, the only reason to start at Jiri is for the experience. For those simply wanting to save the price of the flight to Lukla, the Salleri starting point is a better choice, or more to the point, the closer choice. Of the entire trek prior to Lukla, however, I’d pick the stretch before Salleri, mainly because of Lamjura Pass. It’s also more welcoming and a better taste of Nepali mountain life. From Salleri, the trade is tourism and mountaineering.

With only one wrong turn which we recognized quickly due to our constant checking of gps, we had an interesting first morning hike. We were on trails most of the way but would occasionally travel along dirt roads. This is where people live, the Nepalis we met were going about their daily lives.

We arrived at Shivalaya at lunch and crossing a large suspension bridge, I noticed a young lady, about 20, sitting outside a lodge ready to greet us. She had a beautiful smile and charming personality and I was smitten. Maybe I was euphoric from the hike already, but regardless, she was a very beautiful woman.

We were motioned toward a permit office where we showed the permits we had already bought in Kathmandu, then we hustled back to the young lady’s lodge for lunch. More Dal Bhat. I flirted with her, and it seemed as though she was used to it and let me know that her father was in charge of her relationship affairs. Wait, might have to go find him. Do we have time for a courtship? 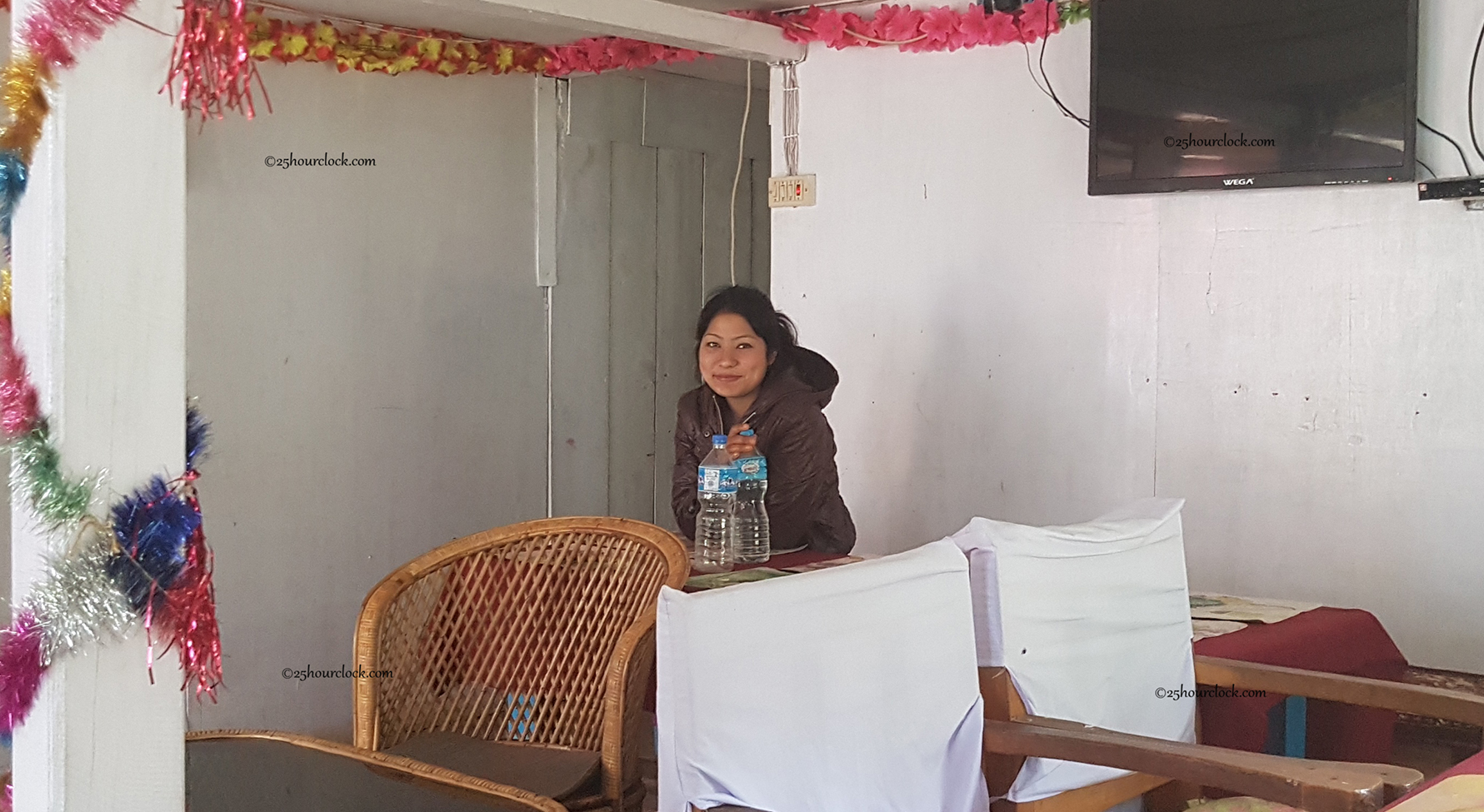 Climbing out of Shivalaya

Up, up, and up! We didn’t see any other trekkers during a climb out of Shivalaya. It was a whole new world and nothing like anything I’d seen elsewhere. The mountains were steep but covered in green terraced farms with huts dotting the landscape. Occasionally, we’d pass straight through a home’s yard, and though more rarely, there’d be a small shop selling junk food.

Coconut Crisps… I’d later fuel some whole afternoons on them. 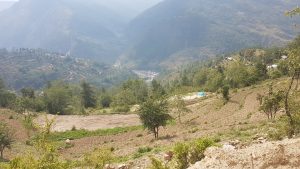 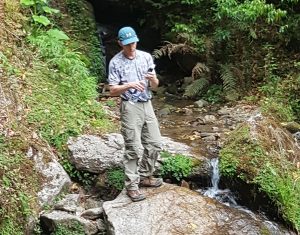 Filtering water from a stream heading towards Deurali Pass. Later, we’d discover it unnecessary to acquire water anywhere but lodges.

One point to pick about this section of the trek was the amount of trash on the trail. I suppose it was the month before the monsoon comes through and scours Nepal clean, but there was certainly not a trash service. We passed time by calling out “Frooti!” any time we saw the yellow smashed Frooti box on the ground. When we stopped for the night, I had to try it. Tastes like a mango fruit drink, though not great except for the loads of sugar. 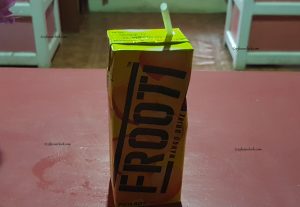 We were ready to take the shoes off and relax after we climbed up the 5 miles to Deurali Pass at over 8,000 feet. The next stop would have been Bhandar, but the Highland Sherpa lodge on top of the pass looked inviting. It was a nice, well-constructed building, and we didn’t think we’d find better.

There wasn’t a soul around though. I finally walked through the lodge and into the kitchen where I found another attractive lady… so far Nepal was killing it in the beautiful women department. Her name was Pussan and the lodge manager, and she spoke near perfect English.

We dropped our packs in a second story room and sat in the dining room. More Dal Bhat. I was purposely sticking to food that I figured they made a lot of, as well as being careful to sterilize any water I drank. A Steripen worked wonders for tap water from lodges. My goal was not to catch any kind of stomach virus or travelers’ shits. I also passed on peppers and spice and such where possible. Milk Tea was our drink, it was great, with sugar. The lodge also had an electric hot water for $2. After our sweaty climb, it seemed a no brainer.

Our room on Deurali Pass. Better than we had expected on this portion of the trek.

We seemed to be the only trekkers at the lodge, though there were plenty of Nepalis, they were there to work on cell towers. We were not yet in such a rural area as where we were heading. The Nepalis seemed genuinely interested in talking with us, they were traveling, we were traveling, that’s what traveling is all about.

By 10pm, the lodge was dead silent and we slept like babies.